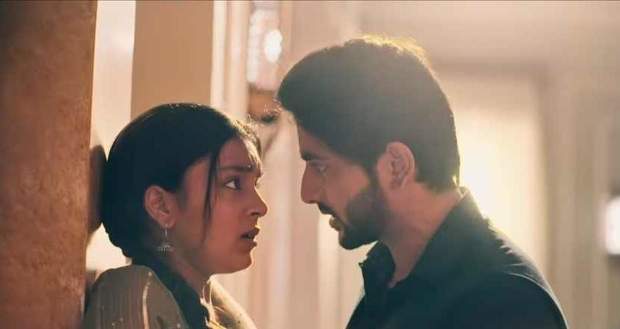 Today's Imlie 2nd March 2022 episode starts with Imli getting anxious as Aryan doesn't open his eyes when she calls out for him to wake up.

At the same, the ambulance arrives at the spot which transports Aryan to the hospital.

At the hospital, after checking up on Aryan, the doctor informs Imlie and the family members that Aryan is having a problem breathing due to internal injuries.

The news leaves everybody devastated when the doctor says he has been put on a ventilator.

Being traumatized by the accident, Arpita starts losing her strength and is taken to another room to tend to her.

Meanwhile, in his unconscious state Aryan recalls the moment when he had decided to avenge Aditya.

With the decision being made Aryan starts walking into the darkness.

As Aryan walks, his attention is caught by a voice asking him to stop.

Aryan finds somebody emerging from the white light entering his darkroom.

When the figure becomes more clear, Aryan realizes that the person is no one other than Imlie.

Imlie holds Aryan's hand and starts to take him out of the darkness towards the light.

At the same time, Aditya appears in the picture, capturing Imlie's hand and taking her away from Aryan leaving him alone in the dark.

Aryan starts breathing rapidly after the frightening nightmare. He is scared of Imlie leaving him.

Imlie notices Aryan breathing rapidly and enters the room to look after him.

Imlie calms Aryan down but she herself breaks down. Crying hysterically, she reminds Aryan that they had been partners with an equal share in every problem.

Imlie demands her share of sorrows from Aryan and while doing so Aryan's purse falls from the bed revealing the anklet Aryan had kept with himself.

However, the anklet skips Imlie's eyes as Imlie rushes out of the room to call for the doctor as Aryan starts breathing heavily again.

On the other hand, Aditya learns the truth about Aryan being there in his life with a motive of revenge and considers him as an enemy.

Aditya decides he won't let Imlie commit the same mistake he did that is, trusting their enemy.