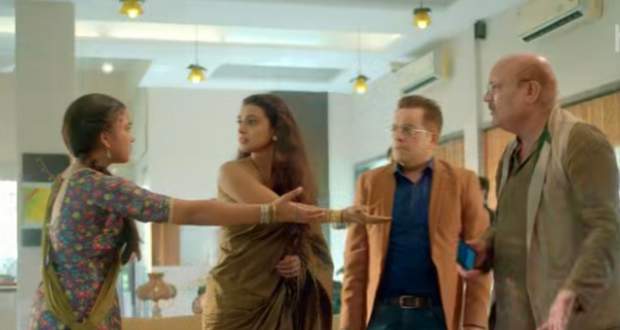 Today's Imli 30 July 2021 episode starts with Imlie getting hurt on her forehead as someone hits her with a stone.

Aditya gets emotional seeing Imlie in pain on the video call.

On the other hand, the Minister asks the guards to call the leader of the strike to meet him.

Later, Anand Bhai's goons ask the Minister to hand over the phone to Aditya's wife.

Both Imlie and Malini put their hands forward to talk to Aditya.

Malini receives the call and she gets upset as Aditya just talks only about Imlie.

Further, Malini scolds Imlie for being selfish and tells her not to reveal her and Aditya's marriage as it will hamper his reputation and be dangerous for his life.

Imlie loses her confidence but Rupi encourages her back.

Upcoming Imli episode update: Imlie challenges the Police force and says she won't let anything to happen to her husband.

© Copyright tellybest.com, 2020, 2021. All Rights Reserved. Unauthorized use and/or duplication of any material from tellybest.com without written permission is strictly prohibited.
Cached Saved on: Monday 17th of January 2022 09:14:11 AM