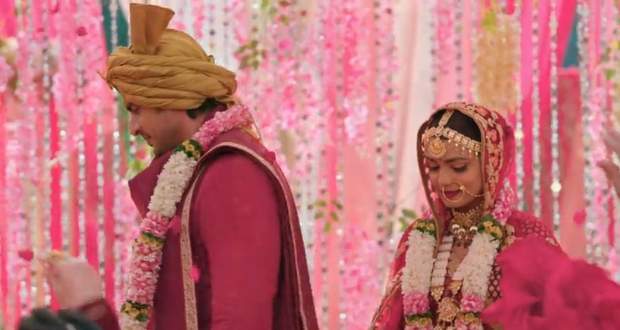 Aditya comes there and asks her if she is okay when Imlie starts apologizing to him and tells him that she didn't invite Mithi and Satyakaam.

Satyakaam and Mithi are leaving while Dev sees them and gets shocked to realize that it is Mithi.

Dev decides to go there but holds back when he thinks that Satyakaam is her husband.

Later, Malini and Aditya's marriage proceeds while Imlie witnesses it.

Panditji asks for vermilion and Aparna tells Imlie to bring the vermilion.

Imlie thinks that all her relations are left behind and that now she's in the hands of Goddess Sita.

The priest declares Aditya and Malini as husband and wife after which they take elders blessings.

Dev goes to look for Mithi and sees that she is not there.

Mithi sees Dev from the side mirror and goes there but doesn't find anyone after which she and Satyakaam leave.

Malini grows emotional during her wedding ceremony while Imlie feels sad that she hurt her mother.

Dev is in Malini's room which holds all her things while Imlie comes there and tells him that everyone is waiting for him outside.

Dev grows emotional about Malini's departure while Imlie consoles him.

Imlie emotionally talks about parents and convinces him to come out.

© Copyright tellybest.com, 2020, 2021. All Rights Reserved. Unauthorized use and/or duplication of any material from tellybest.com without written permission is strictly prohibited.
Cached Saved on: Saturday 23rd of January 2021 12:55:26 PMCached Disp on: Tuesday 26th of January 2021 04:54:49 AM