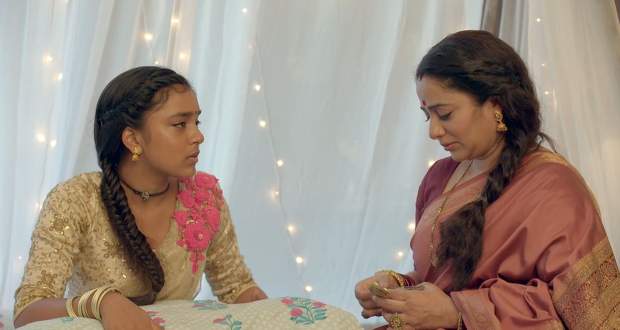 Imli 31st May 2021 Written Update: Imlie reunites with the Tripathi's

Today's Imli 31 May 2021 episode starts with Imlie apologising to Aparna while they both get emotional.

Aditya tells Aparna to give Imlie a place in her heart that she used to have and they share a family hug.

Elsewhere, Dulari tries to steal from Malini's bag but leaves once Malini spots her.

Malini notices the doll in the trunk and gets curious.

Meanwhile, Dev comes to the Tripathi house to ask Aditya about Malini.

However, Aditya lies to him that he talked to her in the morning and that she is fine after which they meet Imlie.

Meethi takes the doll from Malini and says thay it's just a toy while Dulari comes there and says that it is of Imlie's father who left her after getting her pregnant.

However, Meethi says that Imlie's father is Satyakaam while Malini defends her.

Meanwhile, Imlie tells Dev that her father's name is Satyakaam.

© Copyright tellybest.com, 2020, 2021. All Rights Reserved. Unauthorized use and/or duplication of any material from tellybest.com without written permission is strictly prohibited.
Cached Saved on: Friday 21st of January 2022 05:14:14 PM