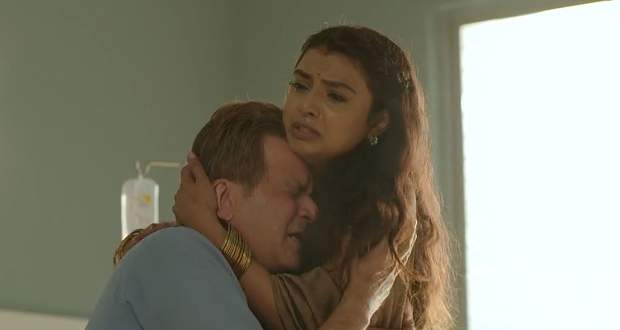 Today's Imli 3 June 2021 episode starts with Imlie praying for Dev while Aparna and Radha look on.

They praise Imlie but she hears them.

Meanwhile, Aditya brings coffee for Malini and they sit to talk.

Malini tries to return him the ring that he had gifted but he insists she keeps it.

Malini tells him that he should go home while he insists to stay.

Later, Imlie talks to Aditya and tells him that she wants to meet Dev in hospital and he tells her to come the next morning.

The next morning, Imlie greets Malini in the hospital and informs them that she came without informing as she was worried for them.

Imlie and Malini feed each other food while Malini tells her to take Dev's food to his room.

Imlie goes to Dev's room and helps him sit while Malini sees them through the window and gets happy.

She gives him food while he tells her to consider him as her father and call him father.

However, she denies doing so and says that she considers only Satyakam as her father.

Imlie leaves while Dev cries in front of Malini and she calms him.

© Copyright tellybest.com, 2020, 2021. All Rights Reserved. Unauthorized use and/or duplication of any material from tellybest.com without written permission is strictly prohibited.
Cached Saved on: Thursday 11th of August 2022 11:15:31 AM