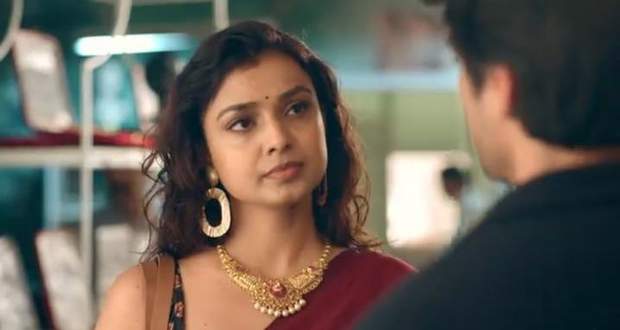 Today's Imli 4 December 2020 episode starts with Malini calling Aditya and informing him that she's at his house.

Aparna, Taiji, Nidhi, and Parul greet Malini and take her inside while Imlie watches them from behind a wall.

Malini questions about Imlie and finds out that Aditya brought her from Pagdandiya.

Aparna says she feels like Malini is already her bahu and asks her to call her maa. Malini thinks if Imlie is the jhalli girl Aditya was speaking about.

Aditya comes home and Malini wonders why he didn't inform her about Imlie. Imlie finds out about the phone dictionary from Tauji.

Malini and the ladies prepare to leave for shopping and Nidhi tell Imlie to take care of the house as there is a thief named Bhoora roaming around in the neighborhood.

Malini confronts Aditya about Imlie and he responds that Imlie is not important and that is why he didn't tell her about Imlie.

At home, Imlie is calling numbers from the phone dictionary asking for his father while Dev knocks on the door.

Imlie accuses him of being the thief and tells him to go. He leaves after giving her sweets and thinks that the girl resembles Mithi.

Aditya and the ladies drop Malini at her home and she invites them in.

Anu taunts her and the ladies give her a lecture on a family running on love.