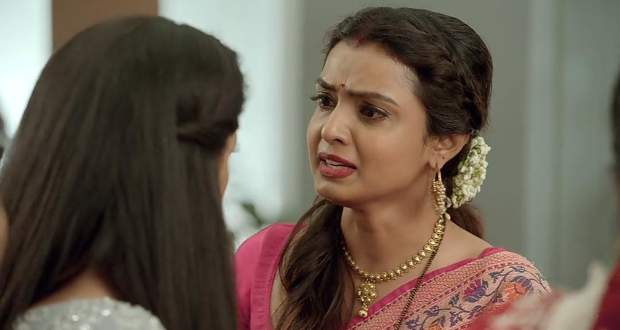 Anu says that she'll remove the Sindoor by her own hands and advances towards Imlie.

The Tripathi's try to stop her when Malini tells Anu that she has no right to remove the Sindoor which angers Anu and she goes.

Imlie cries while Malini consoles her.

Later, Aditya confronts Imlie as to why she did it when she tells him that he can stop believing their relation but he can't stop her from her responsibility of a wife.

Next morning, Imlie makes Nidhi and Dhruv drink a glass of milk and leaves while Malini comes.

Imlie orders to drink the milk but Malini gives the glass to Aditya and says that Imlie brought it for him.

Imlie suddenly takes the glass from him and drinks it.

Pankaj tells Aditya to take the car but he declines.

Malini's driver comes there and says that Anu has sent a car for her and she decides to go on the car which angers Aditya and he leaves without her.

Later, Imlie goes to pick up the kids when Aparna tells her not great any drama but Imlie thinks that the bus conductor has kidnapped the kids and creates a ruckus.

The kids come down from the bus while the bus conductor tells Imlie to say their full names which confuse her.

The kids request her to go in a rickshaw and she arranges a rickshaw but the driver drinks alcohol and recklessly drives causing an accident.

Imlie decides to teach him a lesson and goes away with the rickshaw while the driver argues.

Elsewhere, Aditya thinks that Malini might be uncomfortable in a middle-class home while Malini wonders why he takes Anu's help as an egoistic issue.

Upcoming Imli episode update: Aditya, Malini get into an argument.