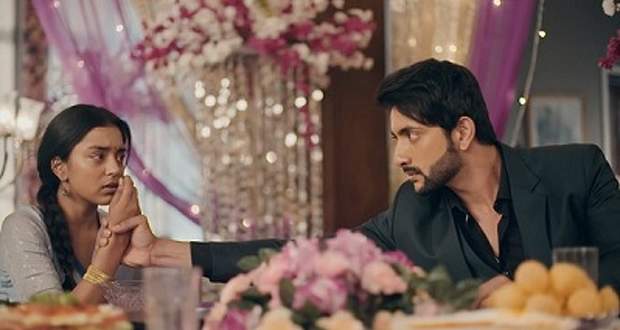 Today's Imli 4 January 2022 episode starts with Rupi arguing with Malini as Malini makes changes to the setting of the living room.

As Aditya passes from there, Malini includes him in the conversation.

When Aditya doesn’t show much interest, Malini asks him to give her at least some of his attention.

Otherwise, no one in the family will take her seriously.

At the same time, Imli along with Aryan, Arpita, and Narmada make their presence at the Tripathi house.

Aditya gets surprised to see Imli there and starts telling her that she couldn’t come into the house now.

Imli informs Aditya that she was there for professional reasons.

As Aditya gets to know that Malini has invited Imli and Aryan there, he fully tries to hurt Imli by portraying his false love towards Malini in front of everybody.

Seeing all drama unfold before him, Aryan asks Malini to hurry up and not waste his time.

After that everybody moves to the dining table for lunch.

To make Imli jealous, Malini starts telling that every cuisine she has made has some significance in Aditya and her love story.

Aditya, in support of Malini, keeps on passing snarky comments at Imli and also asks Malini to feed him with her own hands.

Imli starts eating green chilies when Aditya makes another snarky comment regarding Imli not eating anything because she will find everything spicy.

Further on, Malini asks Sunder to take Arpita to the restroom when Arpita feels some burning sensation in her eyes.

Sunder helps Arpita remove her eye lens and they become all good.

Upcoming Imli episode updates: Aditya will get to know that Imli didn’t send the divorce papers.

© Copyright tellybest.com, 2020, 2021. All Rights Reserved. Unauthorized use and/or duplication of any material from tellybest.com without written permission is strictly prohibited.
Cached Saved on: Wednesday 19th of January 2022 02:24:44 PM