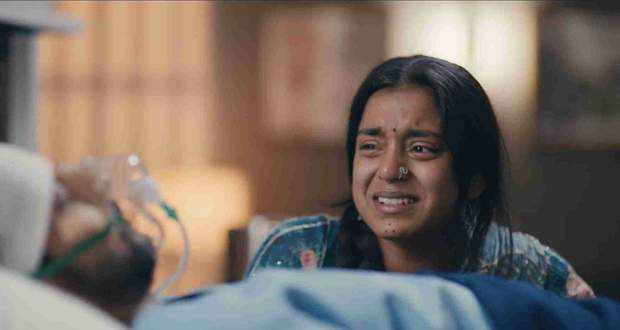 Today's Imlie 4th March 2022 episode starts with Imlie and Aryan being left alone in the room after Narmada and Arpita leave.

Imlie sits on the bed across from Aryan and looks at him for a moment with tender eyes.

Aryan feels awkward seeing those tender eyes and interrupts Imlie asking why she is staring at him.

Imlie replies to Aryan that somebody dying is not a joke and then thank him for getting well.

Aryan gets awkward again and asks Imlie to give him his laptop to divert the topic of conversation.

Imlie laughs at Aryan and pulls his cheek when he adorably tries to get rid of the conversation.

Meanwhile, Aryan gets offended when Imlie pulls his cheek but the look on his face changes to one of admiration when he stares at Imlie’s smiling face.

Further, Imlie contemplates whether she wants to ask a question about Mr. Shikawath's case to Aryan. But she decides not to risk their friendship.

On the other hand, Aryan stares at Imlie's anklets like it is the most precious thing to him and hides it in his wallet.

Elsewhere, Arpita says she can manage and asks Narmada to take care of discharge papers.

At the same time, Arpita feels lightheaded and is about to faint when Sundar catches her and helps her gain composure. Narmada feels happy witnessing them.

On the other hand, Aditya asks Imlie whether she questioned Aryan about the case.

Replying to him Imlie says, she never did or want to doubt him risking her friendship with Aryan.

Later, Aryan is discharged from the hospital. He sees Aditya and Imlie conversing with each other.

At the same time, Aryan angrily strides towards them and punches Aditya.

Meanwhile, Imlie gets in between and tries to stop Aryan. He rants about Mr. Shikawath’s death and revenge.

Further, Narmada asks sorry to Aparna on behalf of Aryan and takes him home.

Elsewhere, Aditya's colleagues blame him for the wrong weather report when questioned by the police.