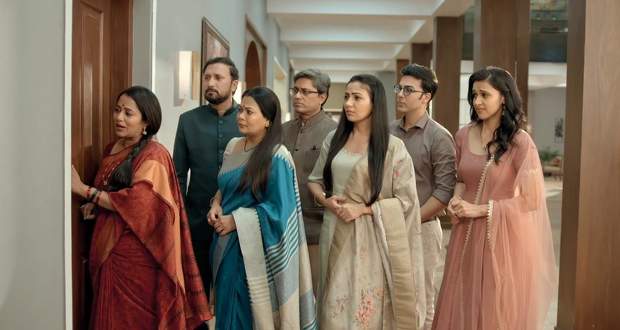 Today's Imli 5 December 2020 episode starts with Dev greeting Aditya's family and telling them about his encounter with Imlie.

He praises Imlie while it is revealed to him that she is from Pagdandiya.

Roopali calls the house but there is no response.

They reach the house and see that the door is locked and shout for Imlie to open the door but there is no response.

Roopali suspects that maybe she ran away with the jewelry. Aditya breaks the door and they go inside.

Roopali informs that the jewelry is missing and accuses Imlie of it while Nidhi calls the police.

Aditya says that Imlie cannot do it and then finds her unconscious.

Imlie regains consciousness and says that she took Tauji's medicines mistaking them for strength pills.

She further reveals that she hid the jewelry with rice so that thieves can't steal it.

Meanwhile, the police come there and ask them for information on Imlie who stole the jewelry.

Imlie gets shocked to hear this and locks herself in her room. The whole family convinces her to open the door.

She opens the door to find everyone holding their ears and apologizing to her.

Imlie goes to Aditya's room to thank him for not letting the police take her away.

However, Aditya says that he did it for himself and further taunts her for trying to ruin his life.

Imlie tells him that it is her life that is ruined and leaves.

Upcoming Imli episode update: Imlie to be made to wear Malini's wedding ring