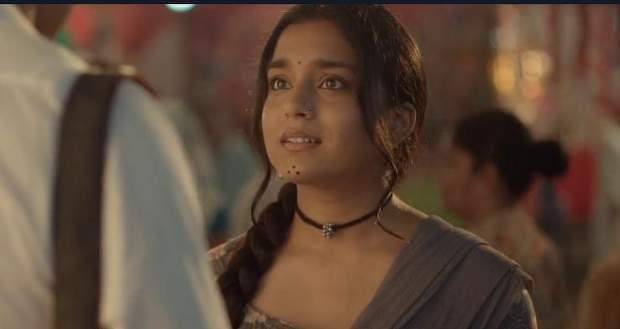 Today's Imli 5 February 2021 episode starts with Imlie coming home with Kids on a rickshaw which shocks Aparna and Radha.

The drunk driver comes there and says that she stole his rickshaw and didn't even give him money.

Imlie picks the alcohol bottle and shows it to Aparna revealing the whole scenario.

Aparna and Radha take Imlie inside while other drivers all come there amd support the drunk driver.

Aditya reaches there while Imlie comes there and pretends to talk to the police taking Aditya's phone.

All the drivers run away while the Tripathi's praise Imlie.

Imlie goes to Aditya's room and gives him tea.

Aditya says that she did a good job today while she starts blabbering when he tells stops her and tells her to bring him biscuits.

Malini makes herself known and tells him that she brought balm for him and asks him if he is still angry at her.

He says that she always starts blaming him but he needs to go to work in the morning and not relaxing go in a car.

Imlie hears their conversation amd thinks that she has to stop their fight somehow.

She goes to Sundar and asks him to write a letter to her when Sundar reveals to her that he is illiterate and Imlie offers to teach him.

Meanwhile, Aditya and Malini get into an argument while she feels upset seeing his changed demeanour.

Later, Dev's mother tries to get Anu to eat with her and Dev while Anu tells her to not interfere in husband-wife's matter.

Suddenly, Malini enters saying that Anu is being a hypocrite as she is also interesting her and Aditya's lives.

Malini reveals that she fought with Aditya and cried hugging her.

Dev's mother tells her to talk to Aditya and solve the issue.

Dev comes there and asks Malini about her self and then asks if Imlie is alright which angers Anu and she starts shouting at him.

© Copyright tellybest.com, 2020, 2021. All Rights Reserved. Unauthorized use and/or duplication of any material from tellybest.com without written permission is strictly prohibited.
Cached Saved on: Wednesday 21st of April 2021 01:00:15 AM