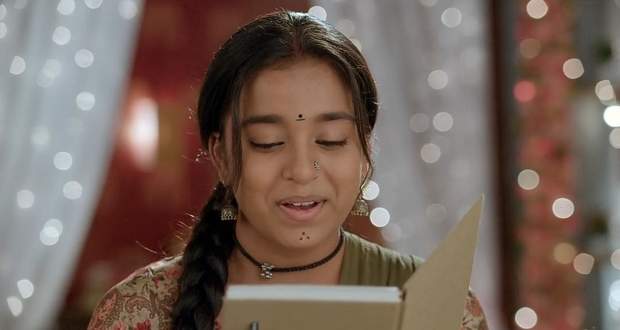 Today's Imli 6 February 2021 episode starts with Imlie showing Sundar two paper's with come to Chhatt(Terrace) and telling him that the differences between Aditya and Malini will be revolved by the plan.

She then discreetly gives the papers to Aditya and Malini and they reach the terrace.

Aditya is about to leave while Imlie tells him to hear Malini feels through her poem and recites a beautiful poem which everyone loved and praises Malini for.

Adotya apologises to Malini and hits her while Imlie imagining him apologising to her instead.

Later, Malini asks Imlie from where she got the poem as she hasn't written on so how can she read it.

Imlie makes an excuse and runs away from there while Malini finds out the diary she read from is blank.

Malini thinks about the poem while Aditya apologies to her once again and praises the poem saying it is better than all of her I love you’s.

Imlie is in the kitchen while Malini comes there and advises her that she should take up writing as she made a grad poem on the spot.

However, Imlie replies that the tas written by one of the singers in her village and she said it here as it was fitting.

Next morning, Aditya informs everyone that his boss and the family is coming over for dinner and requests Malini to make the cake.

Later, Imlie scolds Sundar for throwing the dough in the air while he says that he is making thin crust pizza.

Aparna comes there and tells Imlie to make the thick rite she used to make for Aditya while Malini comes there amd starts making the cake.

Imlie opens the door amd gets confused seeing two Yogi's but invites them in thinking of them as Aditya's boss.

The yogi's praises lie for her kind gesture while Imlie wonders what to feed them as anything isn't ready when she suddenly sees the cake made by Malini.

Upcoming Imli episode update: Aditya comes home with his boss and the family.