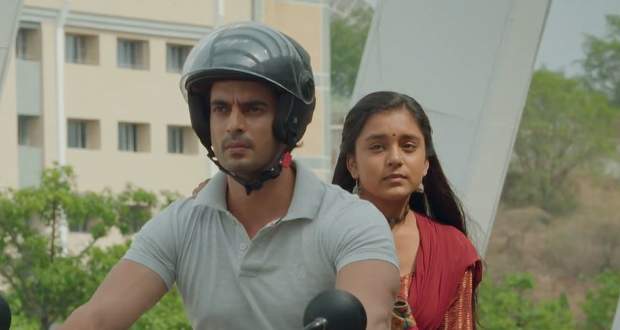 Today's Imli 6 May 2021 episode starts with Imlie saving the students without complaining about them who played a prank on her. Professor praises Imlie while the students apologize to her.

Aditya comes to see Imlie at the college and discuss about Imlie moving to Malini's paternal home without informing him.

Aditya asks Imlie to come home but she refuses and asks about Malini. Aditya tries to convince her to allow him to reveal their relationship but in vain. Aditya offers to drop Imlie home and they both leave together.

Meanwhile, Anu sees Aditya and Imlie going together on a bike. She thinks of teaching a lesson to Imlie.

On the other hand, at Pagdandiya, Meeti is unwell and enquires about Satyakaam. Meethi refuses her friend to reveal anything to Satyakaam about Imlie and she tells her friend that Aditya loves Imlie but he is someone else's husband.

Imlie asks Aditya to drop her away from home so that no one can see them while Imlie asks him to not visit her regularly at the college and think about Malini.

Anu informs Dadi about the reason for returning home early and Imile arrives at that moment.

Anu asks Imlie how she came back home while Imlie lies to her. Anu slaps Imlie for lying to her and tells Dadi that she came with Aditya.

Daddy stops Anu from scolding Imlie and takes her away. Dadi supports Imlie while Anu asks to answer her questions.
Further, Anu warns Imlie to not spoil Malini's life.

© Copyright tellybest.com, 2020, 2021. All Rights Reserved. Unauthorized use and/or duplication of any material from tellybest.com without written permission is strictly prohibited.
Cached Saved on: Monday 27th of September 2021 11:56:25 PM