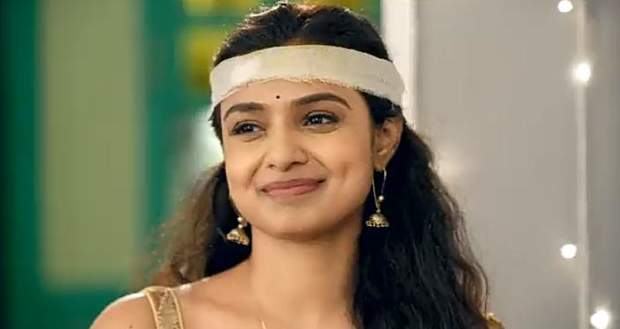 Today's Imli 6 November 2021 episode starts with Aditya telling Imlie to believe in her truth and leaves while she goes to search for Malini and Satyakaam.

Further, she sees from a crack in the window that Malini is aiming the gun towards Satyakaam and telling him that she will tell a lie to the police and will frame him.

Imlie makes a video of them as Malini accepted that she is the one who called Satyakaam and manipulated them and that she is again the person who put the gold bangles in Mithi's gifts.

Elsewhere, the police inform Aditya and the family that they have a shoot at sight order for Satyakaam.

Imlie tells Malini that she has recorded her and runs away while Malini runs after her.

She pushes Imlie from the stairs but Satyakaam saves her while the phone falls and breaks.

Imlie runs after the phone while Malini aims the gun at her when Imlie tells her to shoot her if she wants to end the game.

Just then, Malini shoots her arm and throws the gun towards Imlie to frame her but Satyakaam takes the gun from Imlie.

The police and family members hear the gunshot and run toward the sound to see Malini on the ground while Anu asks her who shot her.

Malini points towards Imlie and Satyakaam as he accepts that he shot Malini.

However, Imlie tells that Malini shot herself and Aditya refuses to believe her.

Imlie runs after Satyakaam while he stops her and explains to her that he took the blame on himself as Malini would have blamed her instead.

Dev tells Imlie that he cannot help her as he is helpless when she calls him a coward and leaves.

Anu scolds Malini for hurting herself while Malini says that she has bet with Imlie that she will out of the house in three days.

Just then, Aditya comes there and asks her whom she was talking about and Malini takes Imlie's name.

Upcoming Imli episode update: Malini tells Aditya to choose between her and Imlie.