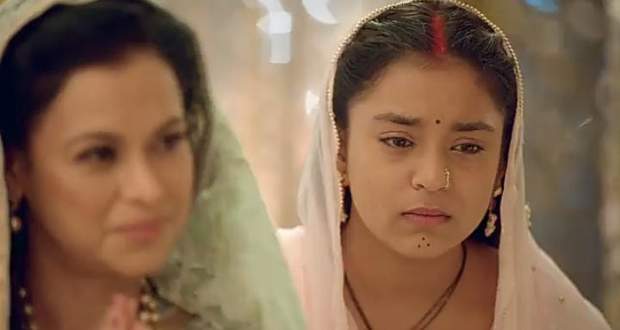 Today's Imli 6 October 2021 episode starts with everybody having lunch together. Aditya gets upset as Imlie refuses to go out with him.

Later, Dulari tries to convince Imlie to accept Aditya's request. But, Imlie tells her that if he doesn't listen to her there is no point in listening to him.

Further, at the dining table, Anu plans to feed Imlie a lot of food with her hands so that she won't be able to eat anything else.

Humorously, both Imlie and Anu feed each other. Everyone gets surprised to see the duo feeding each other.

Meanwhile, Nishant makes a plan to deliver Aditya's message to Imlie from a Puri.

In a twist of events, Dulari handovers the Puri to Imlie, gesturing to her that there's a message hidden inside.

Imlie reads the message. She hurriedly leaves the dining table saying she will return soon.

As Imlie leaves, Malini gets doubtful and she goes behind her.

On the other hand, Sundar helps Aditya to convince Imlie by asking him to practice as if he is talking to him like Imlie.

Imlie comes with the doctor. The doctor asks Malini that why didn't she obey his precautions as he warned her.

He tells her that her lungs are not in a good condition.

Malini defends herself by blaming back to the doctor saying that he has some misunderstanding.