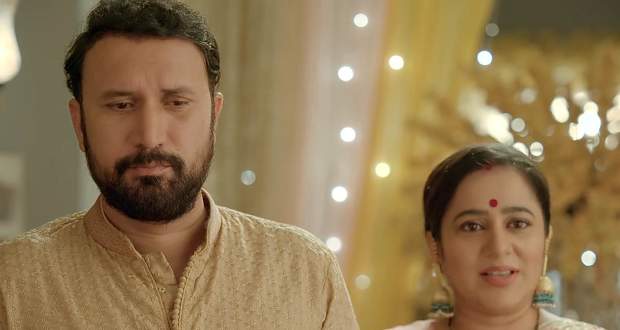 Today's Imli 6 October 2021 episode starts with Malini and Aditya sitting together for the pooja.

Meanwhile, Anu whispers to Imlie that everyone is sitting at their right places and Aditya and Malini are together.

Imlie makes a humorous prank to play with Anu to teach her a lesson.

Along with Sundar, Imlie freaks out Anu and makes her believe that by playing a black magic trick she has made Anu invisible.

Later, Nishant and Rupali join the prank. This convinces Anu to believe that she is completely invisible.

To Imlie's and others' surprise, Dulari too joins the plan and makes fun of Anu.

Anu gets worried and starts yelling at everyone. She asks Dev whether she is visible or not in a fearful tone.

Dev tells Anu to behave properly and stop the nuisance.

Further, Malini gets furious with Imlie. In arrogance, she asks the Pandit to carry with the remaining rituals.

As Malini suffers from Asthama, she starts coughing and her health starts deteriorating.

Imlie calls the doctor. He informs her that he had warned Malini to stay away from dust and smoke as it's not good for the baby as she is suffering from Asthama.

Imlie gets shocked to know that despite the doctor's warning, Malini ignored her baby's growth just to sit with Aditya.

Later, Aditya asks Imlie to go out for dinner with him.

At the same time, Malini calls out Aditya to have dinner with her.

This once again ruins Imlie and Aditya's date.