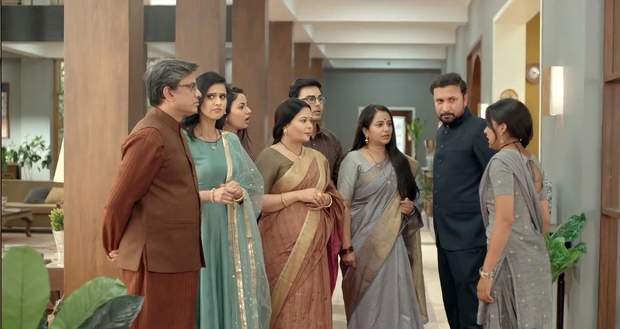 Today's Imli 7 December 2020 episode starts with Rupali informing everyone about her new teaching job. Everyone congratulates her but she feels confused to join the job for junior teacher post.

Imli motivates her and Rupali gets ready to accept the job offer. She asks Imli to bring her joining letter from her room.

Imli tells them that it was her dream to study in that international school. Everyone gets surprised to know that Imli has completed her high school.

Aditya’s Kaaka questions Aditya for interrupting Imli’s studies, while Aditya tells him that Imli left her village as it was her choice.

Aditya’s Kaaka decides to teach Imli so that she could complete her studies. Imli feels grateful to him and says that she will never make anyone disappointed.

Further, Aditya asks Malini to promise him that she will always try to understand him even if he makes any blunder mistake.

Tripathi’s decides to send Imli back to her village as she makes a lot of mistakes. Imli gets emotional on overhearing their conversation.

Aditya’s mother asks everyone to stop teasing Imli, while Imli starts crying out loud. They tell Imli that they were tricking her and will not send her back to her village.

Aditya’s mother asks Imli to wear Malini’s ring to check the size of it. Later, the ring gets stuck in Imli’s finger and Aditya helps her in removing the ring.

Meanwhile, Malini gets happy to meet her grandmother. Anu asks the servants to shift her luggage to the guest house but Malini opposes to it.

Imli finds Aditya’s Kaaka smoking a cigarette and scolds him for his bad habits.

Upcoming Imli episode update: Malini and her parents get shocked to see Tripathi family dancing out of senses.

© Copyright tellybest.com, 2020, 2021. All Rights Reserved. Unauthorized use and/or duplication of any material from tellybest.com without written permission is strictly prohibited.
Cached Saved on: Sunday 17th of January 2021 12:44:23 PM