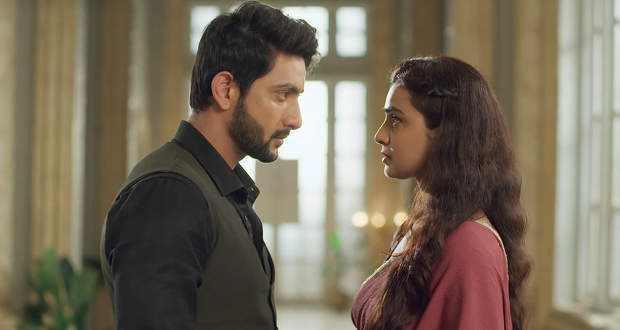 Today's Imli 7 December 2021 episode starts with Rupali and Aditya talking about Imlie and, Rupali asking Aditya to bring Imlie back.

Aditya says it is impossible as Imlie will come only if Malini leaves, and he can’t leave Malini as she is pregnant at the moment.

On the other hand, Rupali and his brother convinced Aditya to talk with Malini about bringing Imlie back.

However, Malini thinks of a new plan to get Aditya away from Imlie.

Later, Malini comes to Aryan’s house to meet him and talk about Imlie but Aryan informs her that he is not interested and he does not have time to talk about boring things and asks her to leave from there.

Malini refuses to leave and says that Aryan loves Imlie but she hates Imlie hinting that both of them have the same moto that is to ruin the relationship of Imlie and Aditya.

Malini offers partnership to Aryan to implement a new plan to separate them but Aryan refuses Malini’s offer and warns her not to come again with cheap proposals.

Aryan makes clear to Malini that he has no feelings for Imlie and asks her to get out of his house.

Afterward, in Tripathi’s house, Aditya talks to Malini about the future of his children and informs her that he will bring Imlie back to his home.

Aditya asks Malini to shift to her mother’s place and Malini plays an emotional drama and cries before Aditya.

Aditya informs his family about his thought of bringing back Imlie and the whole family was overjoyed and plans a surprise party for Imlie.

While in Aryan’s house Imlie feels disappointed by remembering Aditya.

However, Anu calls Aryan and asks him to come to the hotel Raj mahal and also suggests he bring the best reporter who can cover women’s issues.

Upcoming Imli episode update: Imlie cries and collapses down because of Aryan’s words.

© Copyright tellybest.com, 2020, 2021. All Rights Reserved. Unauthorized use and/or duplication of any material from tellybest.com without written permission is strictly prohibited.
Cached Saved on: Wednesday 19th of January 2022 12:42:01 PM