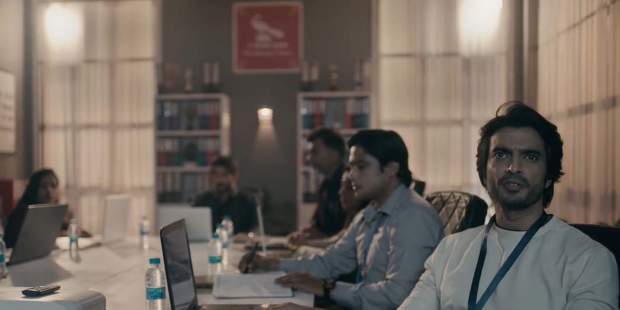 Imli asks Aryan if she can also work on the project.

Imli, deliberately, mocks the superiority of the project so that Aditya will let it go.

Aditya, in return, retorts that Imli should leave these small projects for small journalists like him.

Aditya mocks Imli saying that she should go and interview big celebrities.

However, Aryan cuts into the argument, giving the project to Aditya.

Aditya asks for the location of the project.

Aryan informs Aditya that he has to go to Pagdandia for the project, shocking both Aditya and Imli in turn.

Meanwhile, Aparna suggests to her husband that they should invest some in the name of Imli to support her financially.

Later on, Imli talks to her mother, Mithi, to ask her to take care of Aditya when he comes to Pagdandia.

On the other hand, everybody gets shocked when they get to know about Aditya's project.

Worried, Imli goes to meet Aditya before he leaves for Pagdandia. Malini keeps asking Aditya to let her accompany him to Pagdandia but he denies it.

Aryan confronts Imli for going to Tripathi's house. Imli replies to Aryan that she is just trying to express her emotions in a better way as he had asked her to do.

Further on, seeing Aditya back in the village, Imli's Nani not only insults him but also aggravates villagers to take revenge on him for his betrayal.

As villagers move towards Aditya in an attacking stance, Mithi comes to Aditya's rescue.