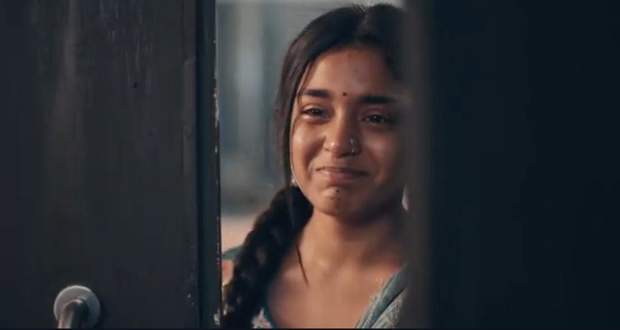 Today's Imlie 7th March 2022 episode starts with Imlie reaching goddess Sita's temple and telling her that she is going to spend a few days in the temple.

On the other hand, Arpita gets pertained about Imlie and says to Aryan that Imlie will never return to their home.

At the same time, Aryan tells Arpita not to worry and as Imlie will return as her goddess Sita's idol is in their home.

Later, Arpita asks Aryan about his revenge. He says that Imlie was never a part of his plan and nothing changes regarding Aditya's doomsday that he is planning.

Furthermore, Arpita gets pissed and walks away from Aryan.

Elsewhere, Aryan's thoughts are filled with Imlie. He stares at her anklets and misses her presence.

However, a devotee informs Imlie about Ashram, which provides food and shelter. She feels happy and says thank you to goddess Sita and her devotee.

On the other hand, the devotee informs Aryan that he did accordingly as told and made arrangements for Imlie's stay.

Nevertheless, Aditya and Aparna discuss about Imlie's stay at Aryan's house after reviling the truth.

However, Aparna thinks otherwise and speculates that Narmada would stop Imlie from leaving the house. Aditya states about Imlie's obstinacy.

Elsewhere, Imlie arrives at the office and glares at Aryan.

Furthermore, Aryan gets furious at Imlie for demoting herself in front of the entire office. She speaks for herself, defends her actions, and asks him to abort his revenge against Aditya.

At the same time, Aryan firmly states that he will never quit his revenge on Aditya and walks away.

At the same time, Aditya gets arrested for fake reporting about the weather.

However, Imlie leaves the meeting room to attend the call but it gets disconnected. She overhears the truth about Aditya and his colleague’s malfeasances.

On the other hand, all the reporters gather at the police station and demand punishment for Aditya's misstatement about the weather.

Mr. Shrivastav arrives at the police station and declares Aditya's ten years punishment and cancels all his awards.