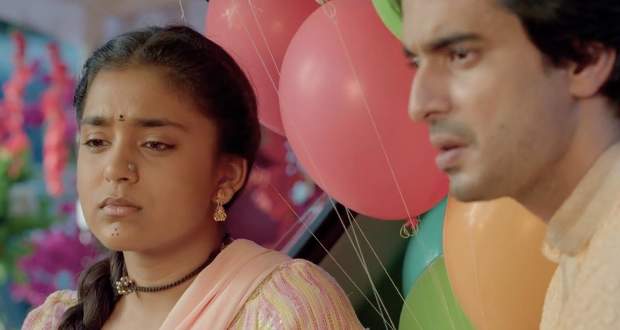 Today's Imli 8 April 2021 episode starts with Aditya telling Imlie that they will have to hurt Malini by letting her know the truth of their relationship.

Aditya asks Imlie whether she loves him this makes Imlie speechless and she refuses to express her feelings towards Aditya.

Later, Nishant asks Aditya what is going between him and Malini as their relationship is not like before.

Aditya replies to Nishant that if he was worried about relationships, he and Pallavi would have been together now.

Further, Anu inflames Malini about Aditya saying that what must he be doing with Imlie for so long. Malini defends Aditya by telling Anu he must have been stuck in traffic.

Satyakam tells Mithi that she should tell the truth to Imlie about her father.

Malini’s dadi suggests her to think about her and Aditya’s future and plan for a baby to make their relationship back to being happy.

At Tripathi’s mansion, Rupi sings a song which makes everyone emotional and Imlie starts crying.

Meanwhile, the lights go off and Imlie goes to Aditya’s room with a candle. He asks Imlie whether why she cried listening to Rupi’s song.

© Copyright tellybest.com, 2020, 2021. All Rights Reserved. Unauthorized use and/or duplication of any material from tellybest.com without written permission is strictly prohibited.
Cached Saved on: Tuesday 30th of November 2021 01:31:12 AMCached Disp on: Wednesday 1st of December 2021 02:47:18 PM