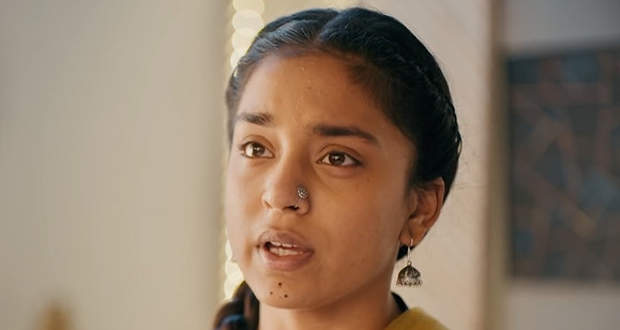 Today's Imli 8 January 2022 episode starts with Mithi coming to Aditya's rescue when all the villagers come together to attack him.

Aditya goes and meets Chandlal who arranges for a meeting with the terrorist.

Before the interview, Aditya records the story of all the families hurt by the terrorist in one way or another.

Meanwhile, Imli argues with Aryan for releasing the Pagdandia story which Aryan has stopped from going on air.

Aryan tells Imli that if Aditya brings the interview within twenty-four hours only then Bhaskar Times will earn profit. Otherwise, Aditya will fail in his project.

At the same time, Chandlal informs Aditya that his meeting with the terrorist is fixed when Mithi goes to give Aditya his lunch.

The villagers get upset with Mithi for helping out Aditya.

Mithi gets into a heated argument with villagers as they start throwing insults at Imli's character.

On the other hand, Arpita calls Malini to invite Tripathi's family to the channel’s launch party.

Malini finds a way to get information about Aditya.

Later on, Aryan and Imli go to the control room when Aditya starts interviewing the terrorist.

Through the interview, the terrorist demands that apart from money he wants Pagdandia to be free from the government rules.

As Aditya continues to ask questions, the story suddenly stops featuring in the main room.

Imli gets worried about Aditya.

© Copyright tellybest.com, 2020, 2021. All Rights Reserved. Unauthorized use and/or duplication of any material from tellybest.com without written permission is strictly prohibited.
Cached Saved on: Friday 21st of January 2022 05:29:06 PM