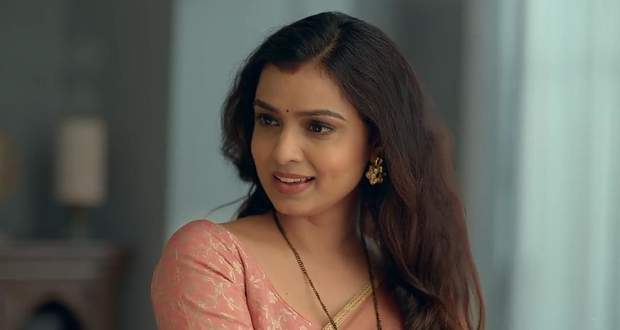 Today's Imli 9 February 2021 episode starts with Malini telling Aditya and Imli that she saw everything and them tells them that they act like kindergarten kids.

Meanwhile, the Chaturvedi's are having breakfast while Anu remembers Dev's words about going to Pagdandiya and starts fainting.

Dev and his mother help her sit while she cries as Dev's mother consoles.

She goes while Anu requests Dev to hold her hand and tell that their relationship is not shadowed by anyone to resolve the past 18 years of distances between them but Dev makes an excuse and leaves.

Later, Aditya and Malini are getting ready while Anu calls her and requests her to come home to meet her and bring Imlie with her as she wants to apologise to her.

Malini gets happy hearing those words and replies that she'll take the day off and will ask Imlie to come with her.

Further, she goes to Imlie and manages to convince her to come with them and tells her to get ready.

Later, Aditya comes home and wonders why it should silent.

Sundar starts blabbering and informs Aditya that Imlie has gone with Malini to her home.

Meanwhile, Dev gets shocked to see Imlie with Anu and welcomes them in.

Anu thanks Malini for coming to see her and also says thanks to Imlie for giving her a second chance.

Malini sees a plastic chair and Anu tells her that she bought it for Imlie as she knows people like her can't be comfortable in luxury while Malini stands shocked.

Anu acts innocent while Imlie tells Malini that it's okay.

Anu thinks that she'll insult Imlie so much that Dev will not be able to take it and will reveal his relationship with the girl.