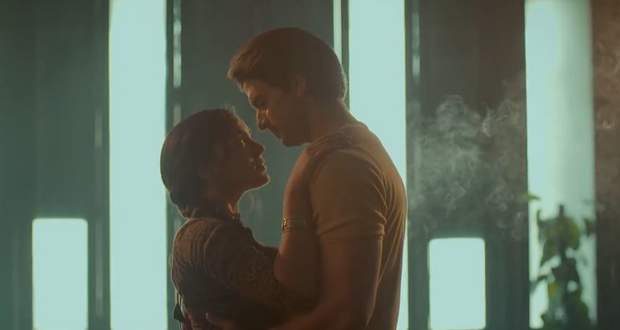 Today's Imli 9 June 2021 episode starts with Aditya asking Imlie if she is excited or getting shy before having a romance with her.

She fixes her hair in the mirror while he takes her hand and dances with her.

She shyly walks away while he tells her to wait and kisses her shoulder gently.

She gets emotional and tears start rolling down her eyes while he hugs her.

Malini sees them from the door frame and leaves getting upset.

She bumps into KC outside and sprains her ankle while he offers to drive her home.

Aditya and Imlie notice Malini's earring by the door and came outside to see them.

KC lies that they came from separate places but planned on leaving together.

Malini agrees and tells him that she wants to go home while Imlie goes to her says that she knows what she's doing while returning the earring.

They leave while Aditya tells Imlie that he's going to inform the family about his and Malini's divorce while Aparna overhears them.

Elsewhere, KC asks Malini about the relation between her, Aditya and Imlie but she refuses to say.

She asks him to leave Satyakaam's case but he refuses and they both argue.

At the same time, Aditya tells the family that they have decided to get divorced and that no one else should be blamed for it.

KC drops Malini at her home and opens the door for her while she thank him and leaves.

Anu is watching them from afar and questions Malini about him.