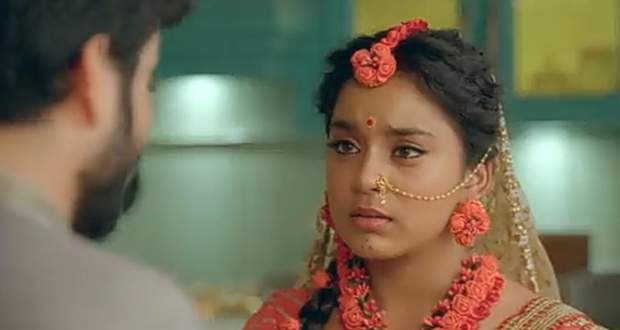 Today's Imli 9 September 2021 episode starts with Anu instigating Malini against Imlie saying that she made her embarrassed in front of everyone and gives her a small bottle.

Later, Imlie sees Malini throwing the bottle in the garbage bin and asks her what was in it but Malini leaves without giving her a proper answer.

Malibu and others are serving the Prasad to the children while Imlie goes and tells everyone to not eat it.

The kids and the NGO people leave feeling insulted after which Imlie tells everyone that Malini added poison in it and that she saw her add something to it.

Malini eats the Prasad and nothing happens to her as she says that Imlie just didn't want her to serve and accused her of such a big thing.

Aditya tells Imlie to apologize to Malini and leaves after she doesn't say anything where others also find her guilty.

Later, Imlie feels guilty in the kitchen while Malini comes there and reveals to her that it was all her plan and that she has spiked the juice which she has already given to the whole family.

Imlie asks her what was in the bottle while Rupali comes there and acts drunks making Imlie realize that Malini added alcohol in it.

Imlie goes out to handle the Tripathi's while Malini comes there and accepts in front of everyone that she spiked their drinks and that she loves Aditya immensely.