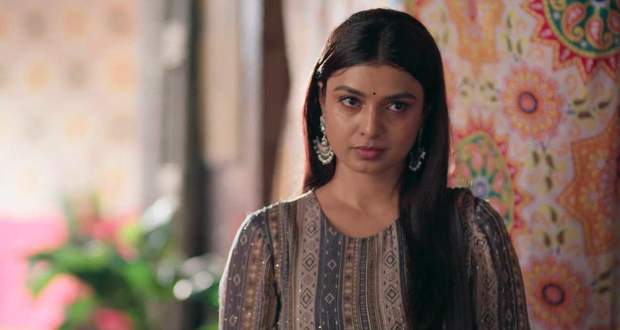 Today's Imlie 10th August 2022 episode starts with Aryan telling the police officer that he has eaten their ladoos since the morning and he still isn't sick.

Further, Aryan brings out a laddoo from his pocket and says that he's very sure Imlie's laddoos were not the problem.

Aryan even eats the laddoo in front of the police which convinces them to release Imlie.

Imlie asks Aryan how he got the laddoo.

Aryan reveals to Imlie that he had stolen laddoos to eat them without anyone's knowledge.

Imlie further rebukes him when he tells her that he had to get her arrested to save her from the villagers.

Further, Imlie asks him why he's helping her and he fiercely looks into her eyes and tells her that he wants to see her tears and her pain.

He demands that he will not leave her until she signs the apology letter while Imlie also shoots daggers at Aryan telling him that she won't apologize.

Just then, the police bring Girish there and Imlie angrily starts beating him with a stick.

Aryan also takes a good look at him and realizes that he is the one who kidnapped Chini.

However, before Girish can take Malini's name and expose her, she throws a stick in his direction which hits him in the head making him unconscious.

Later, Imlie tells Aryan that he should be the one apologizing to her as she has been proven innocent.

Surprisingly, Aryan apologizes to Imlie and tells her that he will return to Delhi the next day.

However, before leaving, Aryan tells Imlie that she can never be forgiven for her past mistakes and tells her to never show her face to him again.

At night, Meethi is telling Cheeni about the police station incident while she demands to know the story of Aryan and Imlie.

Meethi sees that Imlie is sleeping and brings out two torn pieces of Imlie and Aryan's wedding picture.

Cheeni gets shocked to see the pictures while Meethi reveals everything to her.

Cheeni tapes back the picture together and hug it to her chest saying that she's going to bring the couple back together.

The next morning, Imlie keeps looking at the clock subconsciously while remembering Aryan telling her that he leaving for Delhi.

Further, Imlie goes to wake up Cheeni and gets shocked to see a stack of pillows where Cheeni should be.

© Copyright tellybest.com, 2020, 2021. All Rights Reserved. Unauthorized use and/or duplication of any material from tellybest.com without written permission is strictly prohibited.
Cached Saved on: Sunday 2nd of October 2022 01:11:57 PM