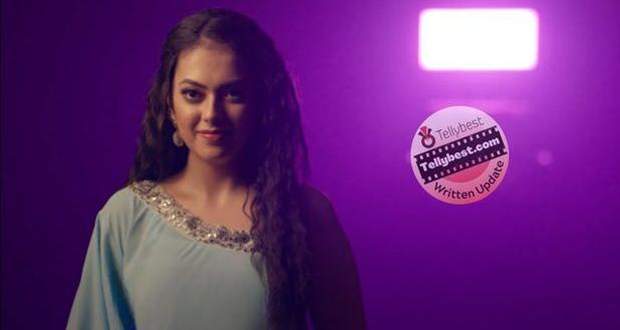 Today's Imlie 10th December 2022 episode starts with Imlie asking Atharva what is wrong while he tells her that nothing is wrong.

Imlie recalls the note while she tells Atharva that he can share his sorrows with her.

However, Atharva leaves from there as he thinks that one has to face some problems on their own only.

Meanwhile, Cheeni meets up with Gautam and mocks him saying that he will look good in striped shirts in jail and comparing him to Jatin.

Gautam says that he knows she is pressured by her family to meet him and starts leaving while Cheeni sees Atharva coming their way.

Seeing Atharva, Cheeni starts acting once again and acts as if Gautam has pushed her which angers Atharva.

Atharva grabs Gautam by the collar and asks him how dare he while Cheeni hugs Atharva and tells him that she loves Arto only.

At the same time, a fan of Atharva, Naina gets surprised to see him and admires him from afar showing her friend the letters she has written for him.

Afterward, Imlie comes to the same cafe to see the guy Cheeni has come to meet.

However, she sees Atharva instead while Naina comes to him and gives him the letters revealing that she's a big fan of his.

Imlie thinks that Atharva has come to meet the girl who wrote that note and planted the bomb.

Just then, some media reporters come there and start clicking his pictures while he gets worried thinking that Cheeni will also be in the shot.

Naina leaves there while Imlie thinks to follow her and goes after her.

Meanwhile, Atharva tells the reporters to delete the pictures but the reporters leave saying that he must have something to hide.

At night, Imlie questions Atharva while he lies to her that he had gone there for a meeting.

The next morning, Imlie sees the newspaper and gets surprised to see Cheeni in the picture with Atharva and the crazy fan (Naina).

Cheeni comes there just then and laughs seeing the picture saying that she is glad Atharva's meeting was held in the same hotel where she went to meet the guy as she got to taste a little bit of his fame.

Atharva leaves from there saying that he has rehearsals while Imlie goes to Cheeni's room with the newspaper.

Cheeni gets worried while Imlie shows her the picture and tells her that she is suspicious of the fan being the one being the bomb planting.

Later, Atharva leaves for his concert.

© Copyright tellybest.com, 2022, 2023. All Rights Reserved. Unauthorized use and/or duplication of any material from tellybest.com without written permission is strictly prohibited.
Cached Saved on: Wednesday 25th of January 2023 11:49:51 AMCached Disp on: Thursday 9th of February 2023 04:24:59 AM