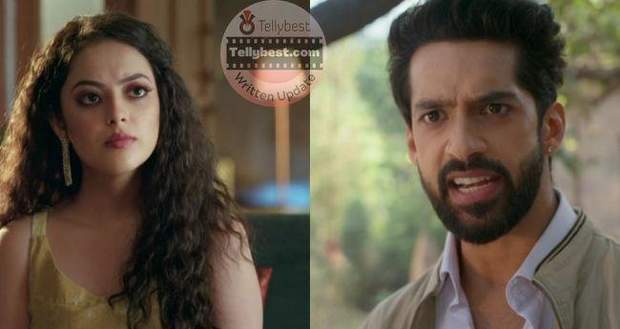 Today's Imlie 10th January 2023 episode starts with Imlie, Atharva, Cheeni, and Abhi being stuck in the village since the bridge is broken.

They return to the village where they are given a room by the village council who apologize for not being able to arrange food.

However, Imlie tells them to not worry since she will manage it.

Cheeni complains about the smell and her heels being ruined while Abhi laughs and tells her to accept her fate for the night.

Meanwhile, Imlie and Atharva help each other make bed while they talk about Imlie's connection with the village.

Abhi comes out of the room and smiles as he watches Imlie and Atharva having fun while Cheeni shouts at him that she will not help him in making a bed.

Abhi tells her to come out of the room and see what being together and supporting each other looks like.

Curiously, Cheeni comes out and gets annoyed to see Atharva and Imlie helping each other while having a pillow fight.

Cheeni tells Abhi that they are separating skin while Abhi tells her to look closely since Imlie and Atharva are not friends but in love.

Feeling enraged that even Atharva has started liking Imlie over her with the rest of the world, she kicks the small pot away and leaves from there while Abhi sighs.

Devika informs Rudra about Imlie and Atharva staying the night at the village while Keya comes there and mocks them.

Just then, Rudra gets a call from Sundar who informs them that Cheeni and Abhi are also stuck in the same village.

Keya says that she is sure Cheeni will create some problems while Devika and Rudra pray to God.

Back at the village, Atharva bumps into Cheeni and he asks her if she's okay while Cheeni accuses him of trying to come close to her and leaves.

Imlie sees the interaction and says that she can surely have Atharva in staying away from Cheeni.

She calls out to him and tells him to arrange some vegetables since she is feeling hungry.

Further, Atharva brings the vegetables and helps Imlie cook while he accidentally burns his hand.

Imlie blows on it but hit him when she realizes that he is joking.

They both joke around and get lost in each other while cooking with smiles on their faces.

Atharva sees three plates and asks Imlie about the extra plate while she nods her head toward Cheeni and Abhi's room.

Meanwhile, Cheeni tells Abhi to order a salad for her while he reminds her that they are in a remote village.

He offers her chocolate but she complains about carbs and refuses to eat it.

Just then, Imlie comes there with the plate of food but Cheeni again argues with her which irritates Abhishek.

He takes the plate of food from Imlie and she leaves while Abhi tells Cheeni that she is arguing unnecessarily.

Cheeni argues that she is not like Imlie and had to fight for everything while Abhi tells her that she should stop fighting then and take a break.

Cheeni looks at him while he tells her to think if they can really stay together or not and leaves.

Meanwhile, Imlie and Atharva sit near the bone fire as they joke.

Atharva gets serious and asks her if she can ever forgive him in the future and tells her to answer when she can.

The next morning, Imlie talks to Sundar who tells her through Shayri and twisted words that she should give a chance to herself and Atharva.

On the other hand, Cheeni hides from Abhi while he leaves thinking that Cheeni has left already.

She further goes to Atharva and compliments him while talking in her sugar-coated words.

At the same time, Imlie thinks about her talk with Sundar and wonders if she should give their relationship another chance or not.

She further imagines her pillow fight with Atharva and smiles as she says that she knows what is in her heart.

On the other hand, Cheeni complains to Atharva that Abhi left her there and Atharva offers her a ride with him and Imlie.

© Copyright tellybest.com, 2022, 2023. All Rights Reserved. Unauthorized use and/or duplication of any material from tellybest.com without written permission is strictly prohibited.
Cached Saved on: Wednesday 25th of January 2023 10:03:49 PMCached Disp on: Wednesday 1st of February 2023 08:48:26 PM