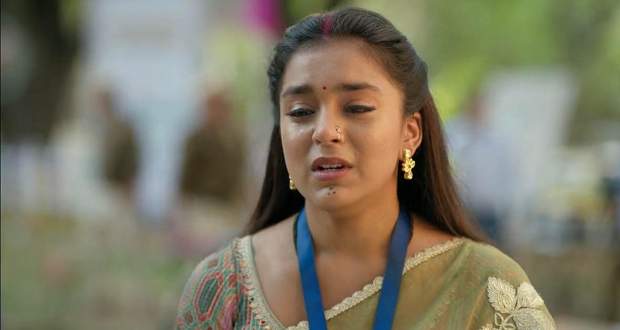 Today's Imlie 10th June 2022 episode starts with Aryan saying that he should have trusted Imlie as she trusted him when he even lied to her.

Jyoti tells Aryan that Imlie should have never faced any struggles.

However, Aryan recalls all the struggles Imlie's been through and says that he will not spare Madhav.

Elsewhere, Harry apologizes to Jyoti while she mocks him saying that he can never be a man enough and taunts him about Nargis who Jyoti hit on the road the other day.

Feeling enraged, Harry tries to suffocate Jyoti but she blackmails him by saying that Nargis will also die if she dies.

Later, Jyoti goes to Madhav's house with Harry while Imlie is seen walking on the road feeling guilty about everything.

Jyoti tries to bribe Madhav by giving him 10 lakhs and telling him to accept fathering Imlie's child.

However, Madhav refuses after which Jyoti orders Harry to kill Madhav.

Harry starts beating up Madhav with brick when Imlie knocks and requests him to open the door.

Imlie sees that the door is unlocked and goes inside to see Madhav unconscious with blood dripping from his head.

Jyoti and Harry manage to escape from the bathroom window while Imlie calls the ambulance and finds a half-torn check of ten lakh rupees.

Later, the other half of the check flies inside the Rathore house which is stuck to Jyoti's heel as she enters.

Neela taunts Imlie for the Rathore family bearing the expenses for Madhav's treatment.

Just then, Aryan informs them that Madhav's expenses are being covered by Bhaskar times.

Imlie thanks Aryan for forgiving Madhav and realizing his mistake.

However, Aryan removes himself from the hug and tells Imlie that he hasn't forgotten Madhav and will expose him after he gets well.

They both get into an argument while Imlie tries to calm Aryan and asks him who told him about Madhav trying to do something to her.

At the same time, Jyoti, who is listening to everything feels tense thinking that Aryan will say her name.

However, Aryan again gets into an argument with Imlie and tells him that she's just in denial due to the trauma.

Imlie tells him that she will make him realize the truth after which they both go opposite ways.