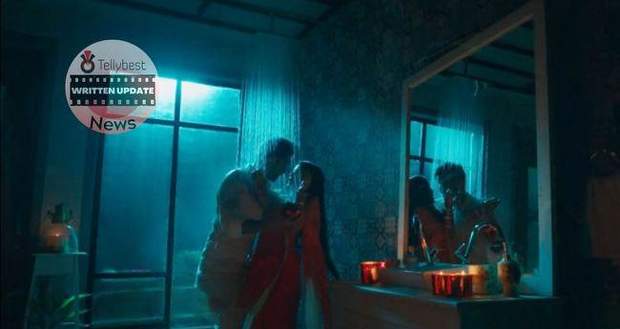 Today's Imlie 10th November 2022 episode starts with Imlie telling Aryan that she has been handling the kids at the orphanage since she was young with Arpita.

Atharva says that it's a great idea while Cheeni eavesdrops on their conversation and gets annoyed at Imlie and the noise that the kids will create.

Meanwhile, Arpita and Rupy think to play a prank on Atharva to lighten up his sense of humor.

Back in Imlie's room, she talks about her mother mesmerizingly and states that she wishes her name was something else as living up to the name 'Imlie' is hard.

Cheeni gets angry and is about to do something when the lights suddenly go out.

Arpita and Rupy clap as they turn the switch off of the electricity box and think that their plan is going to work.

Meanwhile, Imlie goes to the bathroom to light the candles while Atharva goes after her and accidentally starts the shower.

They both get soaking wet in the shower as Atharva holds her close so that she doesn't slip.

Cheeni tries to get their attention by coughing loudly but the couple stays immersed in their world.

Arpita takes Cheeni from there while the lights turn back on and Imlie tells Atharva that the towel is on the rack as she shyly leaves the bathroom.

The next day, Imlie gives the medicine to Cheeni while Cheeni stares at Atharva and says that she should come to check on her at night.

Imlie reveals that she did come to check on her and that she was sleeping when the kids came there.

Atharva tells Cheeni that he should stay with Imlie in front of the family to not bring suspicion to their relationship.

Back at the Rana house, Keya tries to badmouth Imlie by saying that she kept the family's son at her mother in the name of the post-wedding rituals.

Devika reprimands her and informs them that Imlie and Atharva have stayed back because of Sr. Imlie's birthday.

Meanwhile, at the Rathod house, Imlie comes in the costume of a joker and brings smiles to the faces of the kids with her magic tricks and comedic acts.

The kids ask about Atharva and Imlie says that he is her husband while putting a ring on his finger to convince the kids.

Later, Cheeni gets annoyed by a girl while Imlie calms the situation by playing music and dancing with the kids.

Atharva admires Imlie and the kids while Cheeni goes to him and tells him that he should reveal the truth to Imlie.

However, Atharva refuses saying that he does not want to ruin Imlie's day by telling her the truth and reason that he will confess the next day.

Cheeni angrily tweaks the music player and leaves from there while Imlie tries to get the kids to play Antakshari.

However, it comes on 'Maa (Mother)' and everyone refused to play while Imlie goes to her room and apologizes to Sr. Imlie's portrait for ruining her birthday.

Atharva sees this and further starts playing DJ for the kids who start dancing around happily.

Imlie notices Golu upset in the corner and goes to him while he reveals that he misses his mother.

Imlie manages to comfort him as Golu asks her whom she feels at home with.

Imlie looks at Atharva and takes his name while he thinks that Imlie has become a puzzle for him which he is liking.