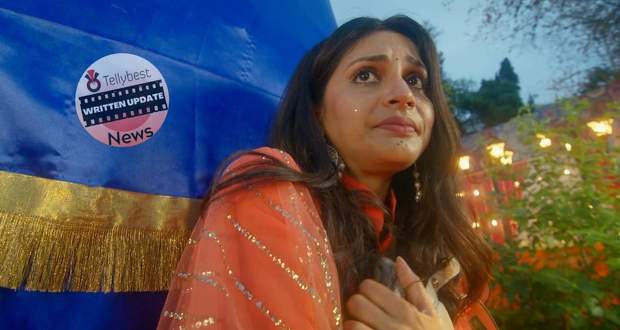 Just then, Atharva comes there heartbroken and tells everyone that they won't have to ask their father whom he likes anymore.

Atharva's parents come forward and try to console him while he states that it was only he who thought that something was going on between him and Cheeni.

Atharva dejectedly says that Cheeni already has someone in her heart and agrees to marry Imlie as his father had wished.

Later, Atharva's Bua helps him put ointment on his injuries while asking if he has moved on from Cheeni and loves Imlie.

Elsewhere, Imlie recalls how Atharva saved her and wonders if she is only Rudra's choice or if Atharva also likes her.

Meanwhile, Bua tells Atharva that she knows he still has Cheeni in his heart and tells him to not get married to Imlie.

However, Atharva says that he can at least make his family happy by marrying Imlie while Bua says that it is wrong of him to end Imlie's life by marrying her when he doesn't love her.

On the other hand, Imlie feels flustered as she thinks if she should call Atharva and ask him about his injury.

At the same time, Cheeni feels disappointed to be stuck with Jatin and Imlie getting Atharva.

Jatin tells her to ask him questions so that some conversation happens while she asks him about his salary.

However, when she is not satisfied with his answer and mocks him to jump from the Balcony if he likes her.

Jatin agrees and climbs on the ledge while Rupi comes there and gets shocked to see Jatin on the ledge.

Rupi rushes to bring the family while Cheeni thinks that she will get out of this proposal by Jatin refusing to jump.

The family members also rush there and try to convince Jatin to climb down while he asks Cheeni if she will not go back on her word of marrying him if he jumps.

Cheeni egoistically says that she is always true to her words and looks at her phone.

Jatin jumps and everyone gets scared including Cheeni who rushes toward the ledge to see him.

However, Jatin is standing on the platform above the window and the family praises him for completing Cheeni's challenge with his twist.

Cheeni argues that it's cheating while Jatin tells her that he'll always do as she says but not blindly.

Afterward, Atharva's mother Devika tells him to select the jewelry to be sent to Imlie while Rudra gets the call telling him that Cheeni's marriage has been fixed.

© Copyright tellybest.com, 2022, 2023. All Rights Reserved. Unauthorized use and/or duplication of any material from tellybest.com without written permission is strictly prohibited.
Cached Saved on: Monday 21st of November 2022 09:50:17 AMCached Disp on: Friday 9th of December 2022 03:49:23 AM