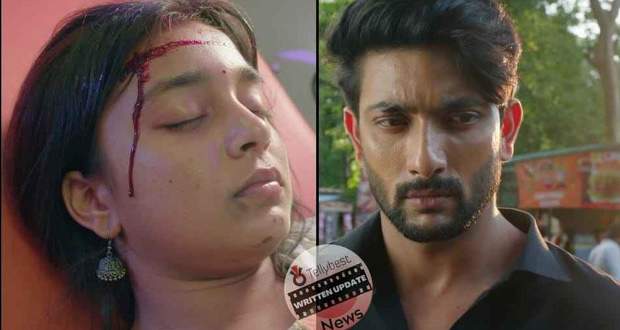 Today's Imlie 10th September 2022 episode starts with Aryan entering the room. He and Imlie see each other from the curtain and Imlie walks towards Aryan and slides the white curtain.

Imlie’s eyes fill with tears and Aryan watches her like his life has come back while he holds her hand lovingly and kisses it.

Aryan gets shocked seeing Imlie’s bump while a slow song "Tere Liye" plays in the background.

Mithi declares to Ved Ji that Imlie’s medicine has arrived while watching Aryan.

In Rathore’s house, Neela accuses Anu of scheming to marry Aryan to Malini and Narmada tells her that Aryan can do whatever he wants.

In Cheeni’s room, Cheeni is crying holding her drawing and Malini snatches the drawing from her and tears it into pieces.

Malini tries to threaten Cheeni to stop thinking about Imlie while Cheeni confronts Malini saying what she will do when Imlie comes back.

At the same time, Malini gets a transaction message from Aryan’s card and calls his driver.

The driver informs Malini that Aryan has bought medicine for Imlie while Malini gets shocked by the news of Imlie being alive.

On the other hand, Mithi informs Aryan about Imlie’s coma state after she got into an accident 9 months ago.

Aryan feels guilty and goes to apologise to her while thinking that Imlie is pregnant with someone else's child.

In Malini’s house, Cheeni is jumping with happiness while Anu chases her for making a commotion in the house.

Meanwhile, Cheeni gets scared when Malini reaches the house.

In the clinic, both Aryan and Imlie are awkwardly sitting on the bed and Aryan helps her drink water when she coughs badly.

Aryan informs Imlie gloomily that Cheeni talks about her all day and curiously asks about who lives in the house hoping to find the father’s name.

Nonchalantly, Imlie informs him that she and Mithi live here but Aryan asks about the father.

Imlie gets shocked as she remembers she didn’t tell Aryan the truth and her tears start to flow uncontrollably.

Thinking Aryan will not take her back and she will not be able to handle his betrayal this time she doesn't tell him the truth.

Meanwhile, Aryan gets infuriated when Imlie doesn’t tell him about the father's name but Imlie accuses Aryan of not stopping Malini while she was kicking her out of the house 9 months ago.