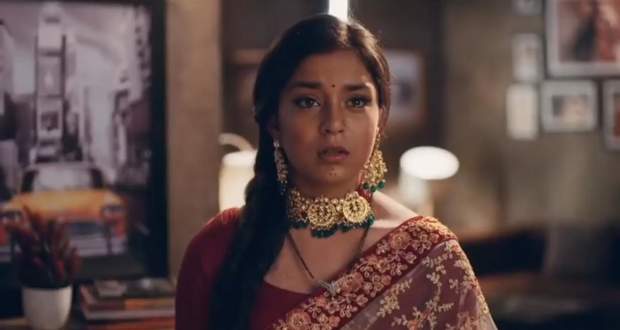 Today's Imlie 11th April 2022 episode starts with Aryan destroying the laptop and telling Imlie that everything is her fault and that she is distracting him.

He scolds her for coming into Arvind's room without permission and she apologizes to him frighteningly as he releases her.

Asking everything to be put back in its place, Aryan scolds Imlie for it while she reluctantly does as he says.

He drags her out of the room and tells her to find the list of employees on her own.

Later, Imlie sits in front of the laptop and manages to recall all the names of the employees using her muscle memory and feels happy.

The next morning, Imlie is on her way to AJ Colony to interview the employees when Neela tries to stop her but fails.

Imli tells Narmada that she will bring back her medicines on her way home.

She further takes a ride from Aryan who drops her off at the AJ colony but feels uneasy about it.

Imlie gets the new address and investigates the families of the employees.

Imlie tells Aryan that she thinks the employees are in a bad condition after the incident.

Imlie gets surprised to see a huge mansion at the address given by one of the employees and she video calls Aryan to tell him about it.

Imlie acts as Anu with sunglasses and her dressing sense and manages to impress three ladies who ask her to join them for a game of cards while Imlie hides her phone in the purse.

Further, Imlie tries to find out about the ladies' husbands but notices one lady stopping the others from disclosing any information.

They ask Imlie about her husband making her uncomfortable while Aryan tells her that her plan has failed.