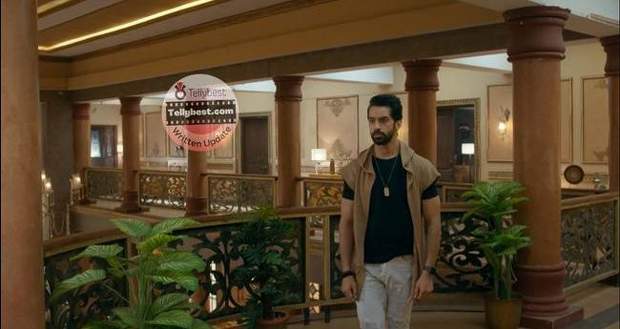 However, Rudra says that he does not want to come while Imlie convinces him by saying that he should see Atharva at least once.

Keya comes there just then and snatches the invitation card from Imlie saying that it is very bad of her to force Rudra.

However, Imlie says that events like this do not happen every day which is why they have to celebrate it like a festival.

Later, Atharva is looking towards the entrance gate hoping to see his family coming. Imlie enters and shakes her head slightly.

Atharva loses hope but he sees his rest of the family behind Imlie and gets happy.

Meanwhile, Cheeni eyes Atharva as he goes to Rudra and stands in front of him.

Rudra tells him that he hopes the concert goes well and starts on time as he has other work too.

On the other hand, Imlie and Cheeni eye Naina as she talks to her boyfriend about the excitement to see the concert.

Imlie says that she doesn't think it would have been Naina as she already has a boyfriend.

However, Cheeni tells Imlie that the girls nowadays are not loyal to their partners and tries to convince Imlie to go with her plan.

Imlie gets hesitant while Cheeni hands her a bottle of juice which is tempered and tells her to give it to Naina so that she can not perform.

Imlie refuses saying that they should confirm first and then take action.

Cheeni tells Imlie to not be a coward and pushes her forward while Imlie walks towards Naina but does not give her the juice and walks ahead of her.

Cheeni goes to Imlie and scolds her while Imlie says that she wants to call the police.

However, Cheeni immediately stops her and convinces her to not do that as Atharva's first concert with his whole family will be ruined.

Imlie agrees and leaves from there while Cheeni sighs in relief.

On the other hand, the crew member makes the Rana family sit in the VIP area while Devika tells Rudra to look around to see how many people want to see and listen to Arto's music.

Elsewhere, Cheeni comes to Atharva and tells him that he's glowing while Atharva keeps praising Imlie for being able to bring his family, especially Rudra, to the concert.

Just then, they hear Naina shouting for security and rush to see her holding the bottle of juice that was tempered with.

Naina tells Atharva that someone is trying to ruin her performance and gives him the bottle saying that the juice is spiked.

The security comes there and shows the security footage of Imlie walking past Naina with the bottle of juice in her hand.

Back at the Rathod mansion, Mrs. Khurana sits with the family and talks about the marriage proposal for Cheeni with her son Abhishek while Anu comes there and tries to ruin it.

Rupi goes to Mrs. Khurana and tells her to proceed as she will talk to Cheeni.

Back at the concert, Atharva goes to Imlie who was just about to tell him the truth when he starts bombarding her with questions on if she was going to give the juice to Naina or not.

Imlie says yes and tries to explain the whole truth to him but he doesn't listen to her and keeps on getting angry at her telling her she would have ruined Naina's life.

He leaves telling Imlie that she disappointed him while Cheeni smiles looking at them.

© Copyright tellybest.com, 2022, 2023. All Rights Reserved. Unauthorized use and/or duplication of any material from tellybest.com without written permission is strictly prohibited.
Cached Saved on: Wednesday 25th of January 2023 09:57:49 AMCached Disp on: Thursday 9th of February 2023 04:24:11 AM