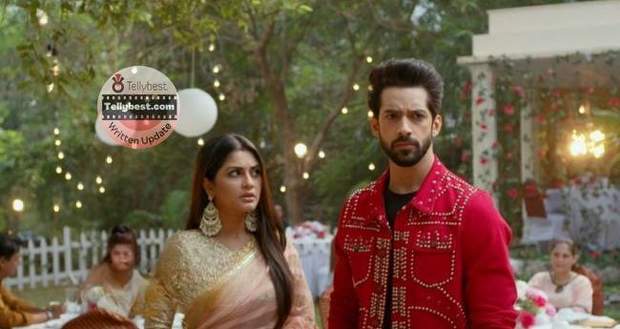 Today's Imlie 11th January 2023 episode starts with Imlie looking at Cheeni while Atharva informs her that Cheeni is coming with them since Abhi has gone ahead without her.

Further, Imlie sits in the passenger seat and thinks to herself that she should control her mind and heart or else she herself will get hurt.

Meanwhile, Cheeni starts her drama and says that she is feeling uneasy in the backseat.

Imlie tells her that she can sit in the passenger seat.

Cheeni gets out of the car happily and waits for Imlie to come out while Imlie tells her that there is no place for her in their car.

Cheeni gets confused while Imlie tells her that Abhishek is waiting for her.

Later, Atharva thanks Imlie for sending Imlie away while she tells him that she did it for herself and returned the favor to him.

Imlie tells him that she has no right to tell him if he should meet up with Cheeni or not.

On the other hand, Cheeni gets out of the car angrily while Abhishek stops her and asks her if she's still upset.

Cheeni doesn't reply to him while Abhi apologizes to her and asks her if they are going to distribute the wedding cards or not.

Hearing the apology, Cheeni gives him a small smile and leaves.

As she is entering the house, Anu stops her and asks her how much she hated the village.

Cheeni complains about her argument with Abhi while Anu tells her that she still has a chance with Atharva who is still in love with her.

Elsewhere, Rudra and Devika get worried about Cheeni coming to their home with the Rathod family to distribute the wedding cards.

Further, Rudra asks about the donation that she gave to the village while the couple reveals to him that they have not gotten any donation in his name.

Rudra gets shocked as he says that he did give the cheque to Keya when Akash and Keya return home carrying shopping bags.

He goes to them and asks them if they deposited the cheque he gave for Imlie's campaign while Akash and Keya make up an excuse and state that they will deposit it in Imlie's next project.

Rudra plays along and asks them for the cheque back while the couple looks down in guilt.

Rudra gets angry and tells Akash that from now on Imlie will be a partner in their business and will handle all the accounts.

However, Imlie comes forward and tells Rudra that she cannot handle the internship and the accounts together.

Imlie suggests Atharva take on the job and Rudra agrees while he goes to call the manager.

Just then, the Rathod family comes there and Cheeni gets motivated as she overheard Rudra telling the manager that Atharva will handle the business accounts from now on.

On the other hand, Atharva helps Imlie by making snacks and jokes around with her.

While he is taking the tray to the family, Cheeni stops him midway and asks him if he is still upset with her.

She touches his hand with the excuse of helping him while he tells her that he is helping Imlie and leaves from there.

Cheeni gets shocked to see Imlie and makes up an excuse while Imlie reminds her that there is nothing that belongs to her anymore there and leaves.

Cheeni grinds her teeth in anger as she says that she will take whatever she wants.

While Atharva is helping serve, Akash taunts him while Rudra shuts his mouth by asking him if he wants blessings or punishment from elders.

Atharva goes to bring the sweets while Cheeni comes in front of him bearing fake tears.

However, Atharva notices that Keya's tea cup is tilting and rushes to save Imlie.

Just before the tea can drop on Imlie, Atharva comes there and puts his hand in between so that Imlie does not get hurt as the tea splashes on his hand instead.

The family and Imlie rush to help while Cheeni tries to show concern.

However, Atharva removes his hand from Cheeni's while the family looks on in shock.

© Copyright tellybest.com, 2022, 2023. All Rights Reserved. Unauthorized use and/or duplication of any material from tellybest.com without written permission is strictly prohibited.
Cached Saved on: Wednesday 25th of January 2023 12:26:03 PMCached Disp on: Thursday 9th of February 2023 04:27:41 AM