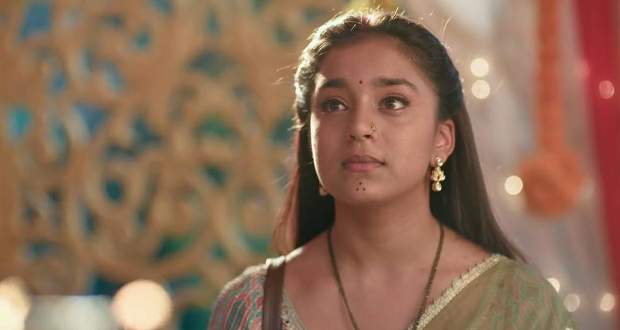 Today's Imlie 11th June 2022 episode starts with Imlie praying in the temple and saying that she hopes she can find the person who is manipulating Aryan and doing all these things.

Just then, the bell falls and lands near the torn half of the cheque which was stuck on Jyoti's heel.

Imlie notices it and realizes that the culprit is someone from inside the Rathore house only.

Jyoti comes there and tries to manipulate Imlie by saying that she should take help from her in her relationship with Aryan.

However, Imlie says that she has already called someone for help which irritates Jyoti.

Further, Jyoti goes to Aryan and lies to him saying that she and Harry are thinking of rekindling their relationship.

Aryan agrees to let Harry stay in the Rathore house while elsewhere, Neela tries to instigate Narmada but gets taunted by Arpita instead.

Later, Imlie sits at the window holding the torn cheque and thinking that it would have been better if Aryan would've helped her in finding the culprit.

Just then, Aryan enters the room and Imlie tries to go to bed while Aryan holds her hand.

However, they both don't utter a word due to their argument and sleep looking away from each other.

Meanwhile, they both imagine dancing with each other and waking up hugging each other.

Still, they don't speak to each other and continue with their morning tasks.

Elsewhere, Jyoti manages to blackmail Harry into staying with her and plans against Imlie.

There is some noise later in the house.

The family calls out to servants and finds no one there while a girl comes there with her head hidden.

The girl turns out to be Imlie in disguise as she introduces herself as Keri (Mango), Imlie's friend who has come to help her.

Jyoti smirks thinking that this village girl is no match for her.