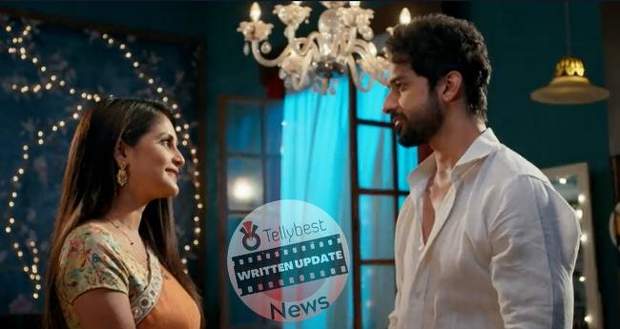 Today's Imlie 11th November 2022 episode starts with Imlie telling Golu that she feels at home and in comfort with herself when she's with Atharva.

Golu looks at Atharva and tells Imlie that he is looking at her.

Imlie turns to look at him in surprise and gets shocked to see that Atharva really is looking at her with an intense look.

Imlie tells Golu that she feels complete with Atharva in her life and looks at him with admiration.

Atharva looks at her at the same time and smiles thinking that she has become a puzzle.

Imlie tells Golu that Atharva is a gift sent by her mother for her and laughs as she brings him to the dance floor.

The kids bring Atharva to dance on the floor also and make him dance with Imlie.

The kids tie Imlie and Atharva's shoelaces together and Imlie stumbles while Cheeni gets angry and leaves.

Further, in the kitchen, Cheeni chops the vegetables angrily while Atharva comes there and talks to her.

Cheeni lies to him that she has made the whole food and does it every year since she cannot afford to buy food for the kids.

Atharva apologizes to Cheeni and tries to flirt with her by asking her what she has made for him.

However, Cheeni gets worried as Imlie comes there and asks her what she's doing there.

Cheeni makes an excuse and leaves before she gets exposed.

At the same time, Imlie talks to Atharva and tells him that she has decided to make Cheeni the head of Bhaskar times.

Atharva gets happy and tells her that it is a good idea.

Later, Imlie gets a call from Shivani who berates her and demands she return home instantly.

Imlie sees that Atharva is listening and tries to wipe her tears while saying that the Rana family is missing them.

As Imlie starts packing her bags, Atharva tells her that he is not taking her back and leave without an explanation.

Further, Imlie sees Atharva leaving without her and calls him while apologizing to him.

Atharva tells him that she should demand an explanation instead of apologizing and tells her that she deserves both love and respect which she won't get in the Rana house.

Imlie looks at the disconnected call in shock and thinks that Atharva might have overheard her conversation with Shivani and left her to start with the family.

Meanwhile, Cheeni calls Rudra and informs him that she has separated Atharva and Imlie after which she disconnects the call without giving much explanation.

When Atharva reaches home, Rudra stops and demands to know why he left Imlie at the Rathore house.

Atharva tells Rudra that he does not love Imlie and does not want her to suffer by being with him.

However, Rudra tells Atharva that he is not welcome in the house until he returns with Imlie.

© Copyright tellybest.com, 2022, 2023. All Rights Reserved. Unauthorized use and/or duplication of any material from tellybest.com without written permission is strictly prohibited.
Cached Saved on: Tuesday 22nd of November 2022 06:56:05 AMCached Disp on: Wednesday 7th of December 2022 04:20:29 PM