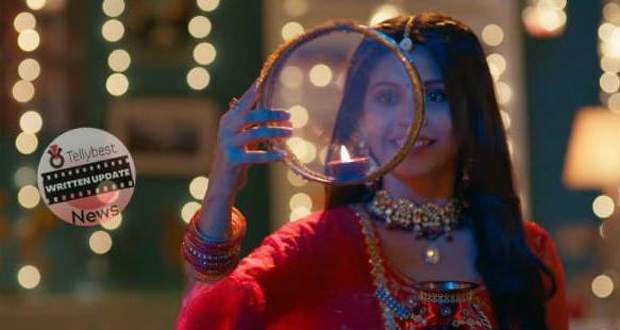 Today's Imlie 11th October 2022 episode starts with Cheeni taunting her family to save some things for her marriage.

She is jealous of the jewellery being sent to Atharva’s house for their Milni ritual.

Meanwhile, Sundar dances on the happy occasion and Cheeni join them thinking she will miss her family's craziness.

Atharva watches Cheeni’s dance with tear-filled eyes as he cannot watch Cheeni getting married to someone else.

Just then, Rupi forces Imlie and Atharva to dance and Atharva holds Imlie by her waist moving her body with his.

However, Arpita breaks their dream while Atharva excuses himself to go home.

Arto does not respond to Cheeni’s bye and goes away but she follows him out.

She calls him and both start to talk about the Dussehra incident but Imlie interrupts them.

Seeing Imlie, Atharva shakes off the conversation and gives Imlie the gift sent by his mother.

Meanwhile, Cheeni gets jealous of Imlie’s gifts and thinks she will run away with all the jewellery.

At night, Cheeni steals Imlie’s jewellery but Imlie hears the door opening and goes to check.

However, Cheeni runs out with her bag and Imlie closes the door thinking Sundar forgot to close it.

At the same time, Atharva is standing outside of the Rathore house as he misses Cheeni.

On the other hand, Cheeni sees a car outside her house and thinks of stealing it.

However, she feels a presence behind her so she turns around but both Imlie and Cheeni scream seeing each other.

The jewellery from Cheeni’s bag sprawls on the floor and Imlie asks about the jewellery.

In Rathore's house, Arpita informs Sundar that Imlie’s jewellery and all the cash are missing while Rupi finds Imlie and Cheeni missing.

Outside the house, Cheeni lies to Imlie saying that she fought with the thief to save Imlie’s shagun jewellery and cash.

Later, they get shocked seeing the police officer talking to Sundar about the robbery.

Seeing Imlie and Cheeni, Arpita runs to them and asks if they are okay while Cheeni thinks about how she can fool the police worriedly.

Innocent Imlie tells everyone about Cheeni’s bravery and the whole family praises her.

At the same time, a man gives a pen drive to the police officer containing CCTV footage and Cheeni prays to god to save her.

Due to Cheeni’s luck, the CCTV footage does not work and the laptop shows a blank screen.

The police go away declaring that it will be difficult to find the thief as there’s no evidence.

Later, Imlie shares her half jewellery with Cheeni and she happily starts to choose all the extravagant jewellery.

Meanwhile, Cheeni tries to take Atharva’s necklace but Sundar offers it to Imlie saying the mother-in-law’s gifts can be divided but not the husband's gifts.

However, Rupi thinks that Atharva's necklace was not kept in the room where the robbery happened.

Rupi concludes that the thief knew the location of the jewellery beforehand.

© Copyright tellybest.com, 2022, 2023. All Rights Reserved. Unauthorized use and/or duplication of any material from tellybest.com without written permission is strictly prohibited.
Cached Saved on: Monday 21st of November 2022 03:10:39 PMCached Disp on: Friday 9th of December 2022 03:48:37 AM