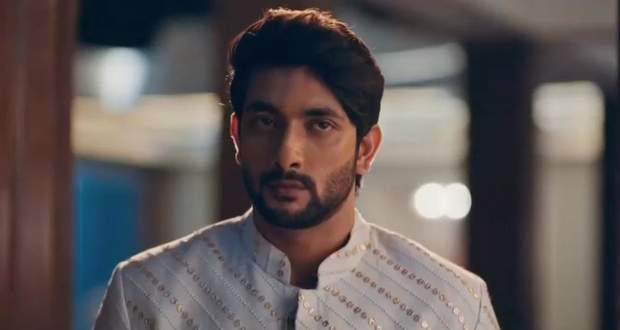 Today's Imlie 12th April 2022 episode starts with Aryan telling Imlie that her plan has failed through the earpiece while she abruptly stands from the sofa feeling furious.

Imlie sits back down and starts ranting about her husband's flaws.

Meanwhile, at the Rathore house, Narmada feels uneasy due to not having her medicine and Neela intentionally makes her drink something spiked.

At the end of their party, Imlie sheds a few fake tears in front of Ashwin's wife and tells her to advise what helped her husband get rich so that she also tells her husband to do the same.

However, Ashwin's wife reveals that it is time for Ashwin to return and tells her to go but Imlie decides to be sneaky and hides in the main bedroom.

Ashwin and his wife talk while Imlie eavesdrop on their conversation and records it on her recorder.

Imlie gets a call that is heard by Ashwin and his wife making them suspicious.

They go to check but find no one except for the recorder at the door which Ashwin's wife recognizes and reveals that it is her new friend's.

Ashwin tells her to search the house for cameras when his wife shows him a picture of Imlie will Aryan in the newspaper making him anxious.

At the Rathore house, Neela instigates Narmada and Arpita against Imlie due to not delivering the medicines on time.

Gudiya gets the delivery of the medicines at the front door that Imlie had sent but hides it from Narmada and Arpita.

Meanwhile, at Aryan's office, he looks at the picture of his wedding with Imlie and recalls his moments with Imlie.

He starts getting worried for Imlie and talks to the pictures that he is not a wall like she thinks and that he is also worried for her and scolds her picture.

Just then, Shilpa comes there and tries to hide her smile seeing Aryan scolding a photo of his wife and informing him about a beauty pageant that she has to judge in the evening.

He gets a call from Arpita and rushes to the house.

Neela degrades Imlie while Gudiya reveals the medicines and lies that she managed to get those through her friend.

Aryan afterward talks to Arpita about his dislike for the beauty pageant that he will not attend when she teases him by revealing that he also wanted to be Mr. India.

They fight over the pictures of Aryan while Gudiya requests him to take her with him to the beauty pageant.