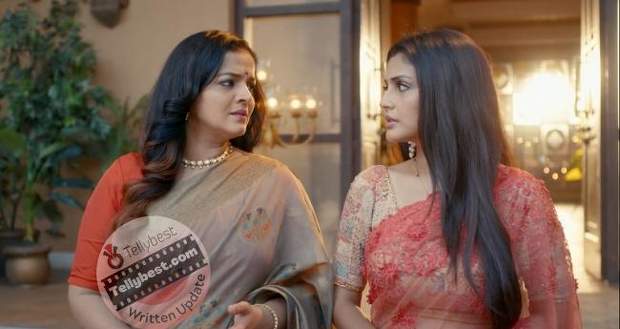 Today's Imlie 12th December 2022 episode starts with Atharva telling Imlie that she has embarrassed him and leaves from there.

Imlie cries while Cheeni looks on from afar and says that she will never let anyone take care of her.

Later, the performance starts and the public enjoys Atharva and Naina's duo while Rudra taps his feet slightly to show that he loves the performance.

However, Keya tells her husband that her goons must be coming to cause chaos and ruin the event.

Just then, some drunkard goons come there and disrupt the event making the crowd erupt in chaos as they start running towards the exit.

Atharva sends Naina home and rushes past the security to save his family where Rudra mocks him for making music for such goons.

However, they both hear Imlie shouting that she cannot find Devika which worries both of them.

Later, the family sits at home solemnly while the police come there and tell them that they have big news.

Atharva asks if his mother is found while the police officer gets a call from someone.

The police officer informs the family that they have found a body similar to Devika's and want them to identify it.

The Rana family arrives at the morgue and Rudra walks towards the body hesitantly while Keya's husband stops him asking what they would do if the body is really of Devika.

He goes back and cries to Keya while Rudra opens the cover and stumbles feeling the ground move.

Imlie consoles Rudra and Atharva while telling the police officer that the body is not of Devika.

Atharva stands in front of Rudra and rebukes him while blaming him for Devika's disappearance.

Rudra tells Atharva that he will not leave him if Devika isn't found and leaves while the family members follow him out except for Imlie and Cheeni.

Atharva has a breakdown while Imlie consoles him saying that they will find Devika soon enough.

Atharva asks Imlie how she managed to live without her mother and cries saying that he cannot even think about living a day without his mother.

Imlie asks Cheeni if she will come to find Devika with them while Cheeni gets a call from Rupy.

Rupy tells Cheeni to go to the hotel she is sending an address to and meet the guy she has chosen for her.

Thinking of this as an escape, Cheeni agrees and disconnects the call while lying to Imlie and Atharva that she has to go since Rupy is sick.

Further, Imlie forms an idea and takes Atharva's phone to make a hashtag for finding Devika and posting it on his social media for that his fans can also help.

The posts soon go viral and the fans get on the street to help Atharva find Devika while the Rana family feels embarrassed by it.