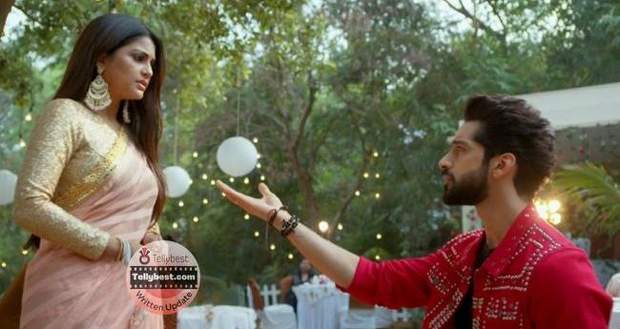 Today's Imlie 12th January 2023 episode starts with the Rana family rushing to take care of Rudra while he says that he is okay.

When Cheeni tries to talk to Atharva, he removes his hand and leaves.

Later, as the Rathods are leaving, Arpita tells Imlie that the way Atharva saved her proves that he loves her while Imlie gets confused.

She wonders if she should believe Arpita and accept that Atharva's concern for her is something more than just a friendly concern.

On the other hand, Cheeni complains to Anu that Atharva ignored her for Imlie while Anu tells her that Atharva is trying to make her jealous.

On the other hand, Rudra and Devika plan to send Imlie and Atharva to a dinner date to bring them even closer while Keya and Akash overhear them.

Further, Keya calls Cheeni and asks her for help in kicking Imlie out of the house.

In exchange, Cheeni demands help in reentering Atharva's life and Keya agrees while informing her about Atharva and Imlie's dinner date.

Cheeni smiles as she calls Abhi and asks him out on a dinner date.

Later, Atharva and Imlie get shocked to see each other at the hotel while Atharva realizes that it was a setup by Rudra to bring them closer.

He convinces Imlie to stay for dinner while Cheeni and Abhi come there and greet them.

Further, Cheeni acts lovey-dovey with Abhi and even feeds him with her hands while Atharva does not omit any reactions.

Chini forms a plan and wipes Abhi's mouth with the scarf that Atharva had given her and calls it trash afterwards.

Atharva gets jealous and starts force-feeding Imlie while trying to act lovey-dovey with her.

However, Imlie leaves from there angrily and Atharva goes after her while apologizing to her.

Imlie berates him for trying to use her again to make Cheeni jealous and tells him to make up his mind on what he wants to do.

They go back inside again and get surprised as they see Cheeni standing near the mic and saying that she cannot live without him.

Cheeni further pulls out a ring and proposes to Abhi who gladly agrees to marry her.

Seeing them, Atharva also gets on his knees and apologizes to Imlie while asking her to be his friend again.

However, Imlie tells him that friendship is a two-way street in which he has disappointed her and rejects his friendship.

Imlie leaves from there while Atharva goes after them.

Abhi tells Cheeni that he wishes he could help while Cheeni thinks that she is too late in her plan.

Back at Rana's house, Imlie runs up the stairs while Rudra stops Atharva and asks him what happened.

Atharva tells him everything and sits on the stairs saying that he knows what he should expect after what he did to Imlie.

Rudra sits beside him and tells him that Imlie is right in what she did and he has to win her trust again to become her friend.

© Copyright tellybest.com, 2022, 2023. All Rights Reserved. Unauthorized use and/or duplication of any material from tellybest.com without written permission is strictly prohibited.
Cached Saved on: Wednesday 25th of January 2023 10:35:59 AMCached Disp on: Wednesday 1st of February 2023 08:46:48 PM