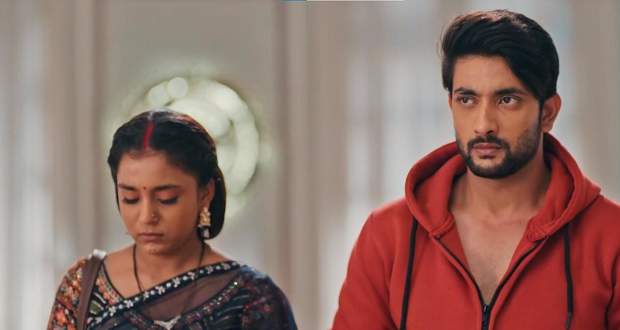 Today's Imlie 12th May 2022 episode starts with Imlie begging the passersby for blood in the hospital lobby out of desperation as she cries.

Meanwhile, Neela insists Gudiya go with Arpita and brings refreshments for them.

After Gudiya and Arpita leave, Neela instigates Narmada into thinking that it is Imlie's bad luck after marriage that is causing Aryan's near-death experiences.

Narmada tries to defend Imlie but gets sucked in by Neela's stories.

Back at the reception, Imlie gets frantic and calls someone to show on the Bhaskar TV News that they need B negative blood in Delhi.

Imlie cries for Aryan upon not being able to do anything while Neela convinces Narmada that Imlie does not care for Aryan as she has already broken off a marriage once.

Later, Imlie forcefully enters a blood bank to search for B- blood when she gets a call from Madhav that they have found a man willing to donate blood.

Imlie rushes to Aryan's room while a warden goes inside the blood bank and takes out a pouch of blood hidden from everyone else which he puts inside his pocket.

Narmada gets influenced by Neela's sayings and goes to take Imlie out of Aryan's room but Arpita stops her.

Back at the reception, Jyoti spots Madhav waiting for Imlie and tells him to go inside if there is important work thinking that Imlie is painted as a bad wife if she goes with Madhav.

At the same time, Imlie holds Aryan's hand and vents all her feelings of worry while Aryan gives a small squeeze to her hand as reassurance.

After exiting Aryan's room, Imlie leaves with Madhav saying that she has some important work and will return in two hours.

Imlie and Madhav meet the guy who is willing to donate blood and leave for the hospital but gets stopped due to traffic.

Imlie starts begging the traffic to clear as she needs to reach the hospital immediately but fails.

Meanwhile, Aryan's condition worsens as he starts thrashing in his bed which alerts the doctors.

To download Imli all episodes or watch Imlie today's (12 May 2022) latest full episode, go to hotstar.com