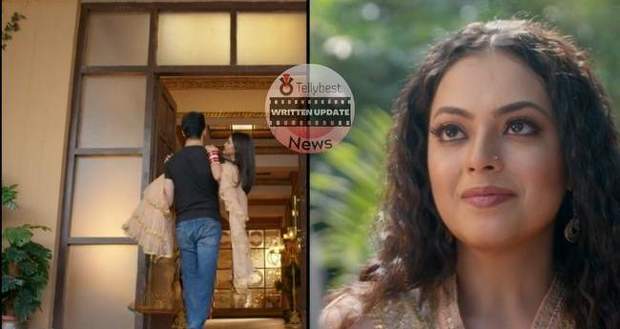 Imlie says that things aren't okay right now but they will be.

On the other hand, Cheeni thinks to use this to her advantage and fake console Atharva to get him on her side.

Imlie tells the family members that Atharva is most probably with his first love, Music, and is at the music studio.

Imlie leaves to go to the studio while Cheeni gets a call from Jatin who demands money from her.

However, Cheeni rebukes him and disconnects the call.

Just then, Cheeni comes there and flirts with Atharva.

Cheeni tells him to turn on the lights and fan while he reveals that Rudra has turned off the electricity.

Cheeni gets annoyed and leaves from there while making an excuse to Atharva.

Just then, the doorbell rings and Atharva happily rushes to open it thinking that it's Cheeni who has returned for him.

However, it is Imlie who tells him that she could not let him stay alone and knows that he left her at home because he overheard the conversation.

Atharva thinks that she thinks of all the wrongs as the right ones and tries to talk to her while she goes and opens the window making the cold and breezy wind rush into the room.

Imlie tells that the family and relationships are freedom for her since she knows she can always turn back to the family for support.

Further, Atharva again tries to confess the truth to her when she stops him and tells him that she brought food for him knowing he might be hungry.

On the other hand, Cheeni gets annoyed and worried as she sees Jatin outside the studio and hides.

Meanwhile, Imlie serves Atharva and he starts eating with his hands as she instructed.

Imlie picks up a guitar and asks him if he would throw away the guitar if the strings break.

However, Atharva says that he will fix the strings and will keep the guitar as he starts talking about his instruments and how they have been a family to him.

Imlie tells him that he should not break the relationship if the strings are broken and tell him that Sita Maiyaa always makes the right family strings.

Just then, Imlie hears a sound and clings to Atharva while he tells her that it was just a cat.

To change the topic, Imlie says that she will fix the electricity and goes toward the fuse box while Atharva goes to get the torch.

Meanwhile, Atharva sees Cheeni and talks to her while Jatin throws a flaming wooden stalk into the studio to light it on fire.

Cheeni sees the fire and tries to drag Atharva away from there while he tells her that Imlie is still inside.

Atharva rushes back inside while ordering Cheeni to call the fire brigade.

On the other hand, Imlie manages to fix the electricity but gets shocked to see the fire and shouts for Atharva.

© Copyright tellybest.com, 2022, 2023. All Rights Reserved. Unauthorized use and/or duplication of any material from tellybest.com without written permission is strictly prohibited.
Cached Saved on: Monday 21st of November 2022 04:37:14 AMCached Disp on: Monday 5th of December 2022 12:49:34 AM