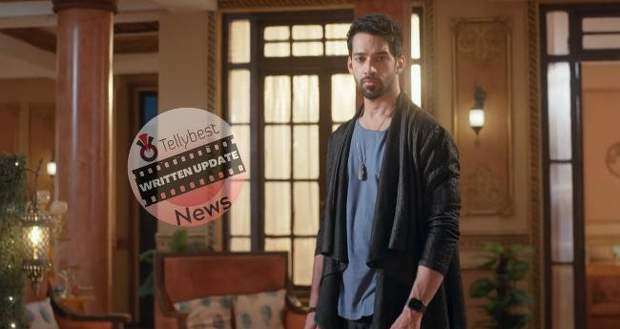 Today's Imlie 12th October 2022 episode starts with Cheeni thinking about how she can snatch half of the jewellery that Imlie got.

At the same time, Rupi offers Cheeni keys to the locker and sarcastically says it will be easy to steal tonight.

Afterwards, Rupi requests her to marry Jatin as she wants her happiness.

Later, Rupi blackmails Cheeni that she will kill herself if she does not marry Jatin tomorrow.

In Rana’s family, Rudra and Devika are going to attend Cheeni’s marriage and Kia tries to stop her father-in-law from attending as her truth will be revealed.

At the same time, Atharva comes and declares that he will attend Cheeni’s marriage after Rudra agrees to not go to the marriage.

Later, Akash and Kia offer to go with Atharva as they do not want him to find the truth behind the marriage misunderstanding.

Meanwhile, Atharva walks out thinking that he needs to see his love getting married so his woven dreams can be broken and give him a reality check.

On the other hand, Anu scolds Rupi for setting up Cheeni’s marriage without her permission.

Rupi retorts that Anu has changed Pagdandiya Cheeni to another Anu but Rupi assures her that she will not let Cheeni become another Malini.

At the same time, Cheeni watches Anu and Rupi fight and feels sad when her bua says that she is a selfish and greedy person.

Later, in Cheeni’s room, Imlie praises Cheeni’s beauty and gets emotional as she does not want to live away from her.

Just then, Imlie prays to god to give every piece of her happiness to Cheeni and she asks Imlie to give her fate to her.

Atharva enters the room and says that only god can decide your fate.

Looking towards Cheeni, Atharva says it was important to see her one more time but Imlie blushes misunderstanding his words for herself.

When Cheeni says that everyone will forget her after her marriage, Imlie says she has made a place in everyone’s heart.

Meanwhile, Atharva leaves the room with tear-filled eyes and Imlie follows him worriedly.

However, Cheeni thinks that Atharva is extra gloomy because he will break his engagement with Imlie today.

On the other hand, Kia and Akash find Atharva missing and go to find him.

Outside the garden, Atharva sits on the bench thinking his life’s theme song (Cheeni) is fading away.

Suddenly feeling a hand on his shoulder he thinks it's Cheeni but gets angry when it is Imlie.

Meanwhile, Atharva accuses Imlie of not being able to understand his problems and that she cannot solve them even if she wants to.

Seeing Imlie cry, he apologises to her fervently and Imlie assures him that she wants to learn everything about him.

© Copyright tellybest.com, 2022, 2023. All Rights Reserved. Unauthorized use and/or duplication of any material from tellybest.com without written permission is strictly prohibited.
Cached Saved on: Monday 21st of November 2022 09:01:26 AMCached Disp on: Friday 9th of December 2022 03:47:50 AM