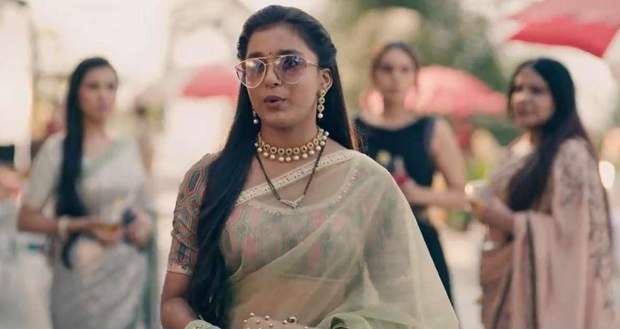 Today's Imlie 13th April 2022 episode starts with Imlie reaching Seth Purandas' workplace to see an employee getting fired for talking back to the boss.

The guards go inside and Imlie helps the boy whose name is revealed to be Madhav.

He informs her that he is from Pagdandiya which surprises her and she befriends him while giving him the job as her cameraman.

Madhav and Imlie both manage to go inside the building disguised as electricians when Imlie gets a call from Aryan who tells her to reach the venue he is attending to report it.

However, she tells that she is doing her reporting right now and that she can't come in the disguise that she is wearing.

Aryan tries to question Imlie but she disconnects the call making him worried for her.

He wonders out loud why he is worried for Imlie and can't leave her alone when he gets shocked hearing Imlie's voice and seeing her sitting in the passenger seat.

He asks the imagination of Imlie how she is there when she dreamily replies that he was the one who had said that he saw Imlie everywhere.

The imagination asks Aryan why he is worried for her when Aryan replies that she is like a stain that he will always notice.

However, Imlie leans closer to him and tells him that she is not a stain but rather a spark of color in his dull life making him look at her in a trance.

Just then, a car honks bringing him out of his imagination.

Meanwhile, at the Purandas' office, Imlie and Madhav manage to get inside.

Madhav sets up the camera to record their conversation as Purandas tells Ashwin that he gave the money 4 years ago to light Arvind's car on fire and gave false evidence to Aditya.

Ashwin tells him to forget that and think about Aryan's situation to which Purandas states that they will also kill Aryan which angers Imlie and she blows her cover shouting at them.

Imlie and Madhav run and hide as the office employees chase them while Imlie convinces Madhav to run away with the camera.

She distracts the employees while Madhav manages to get out of the building.

Later, Imlie manages to get out of the building and runs away from there with Madhav.

At the beauty pageant, Neela sprinkles a powder in other contestants' makeup products to ensure Gudiya's win.