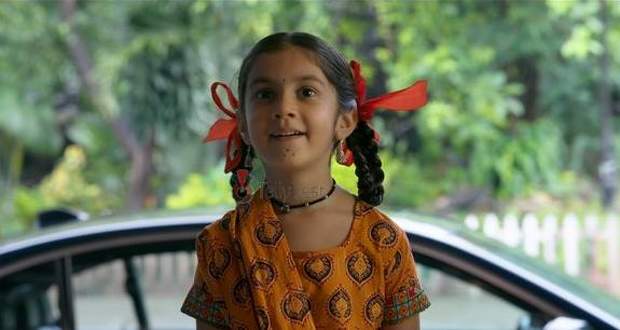 Today's Imlie 13th August 2022 episode starts with Aryan going to the kitchen to find some food for Cheeni while he gets shocked seeing Anu and Malini there.

Further, the family sits for lunch while Anu tries to taunt Aryan by asking him how he came from Pagdandiya alone.

However, Aryan taunts Anu and leaves for the kitchen when he sees Jaggu eating delicious food.

He thinks that Cheeni would like that food and argues with Jaggu about that food which shocks the whole family.

Further, Arpita brings a new plate for Jaggu while Aryan leaves for his room with the food.

In Pagdandiya, Imlie decides to leave the house and look for Chini while Meethi tries to stop her but fails.

Back in Delhi, Cheeni roams around the house while Aryan doesn't see her in the room and gets worried.

Further, Cheeni calls Meethi from a landline and talks to her but Meethi gets shocked to see Imlie snatching her phone and listening to Cheeni.

Cheeni gets scolded on phone by Imlie as she learns that Chini is in Rathore's house.

However, Cheeni manages to sneak away from the landline without getting caught.

Imlie hears Malini and Neela talking ill about her and cuts the call.

Afterward, Imlie argues with Meethi and scolds her while demanding to know how long she knew about Cheeni.

With tears in her eyes, Meethi replies to Imlie that she knew from the time when Aryan and Cheeni went on their way to Delhi.

Imlie gets even more furious hearing this and berates Meethi for seeing her daughter cry and look for Chini while knowing all along where she is.

Meethi tries to talk to Imlie but gets cut off as Imlie tells her that she's doubting her motherhood right now.

Lastly, Imlie tells Meethi that she is going to Delhi to bring back Cheeni before Neela or Malini can do say.

Back in Delhi, Aryan takes Cheeni to his room and scolds her for roaming around while Chini just acts cute.

© Copyright tellybest.com, 2020, 2021. All Rights Reserved. Unauthorized use and/or duplication of any material from tellybest.com without written permission is strictly prohibited.
Cached Saved on: Sunday 2nd of October 2022 06:09:55 PMCached Disp on: Thursday 6th of October 2022 05:11:10 PM