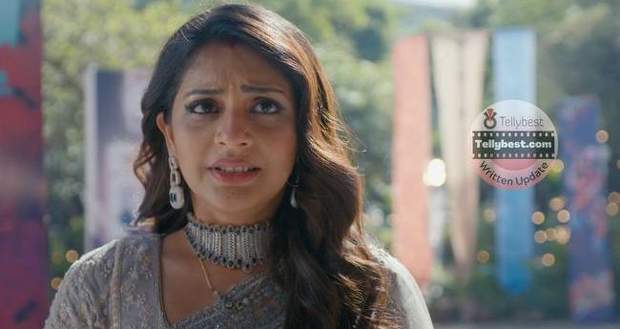 Today's Imlie 13th December 2022 episode starts with Atharva and Imlie rushing to looking for Devika as they find out that Devika was located inside the back of a truck.

They follow a truck after getting information that Devika is in that truck and stop it by overtaking it.

Meanwhile, Keya tells her husband to stop doing the drama now that they are alone while he laughs and tells her to give him some time.

They laugh as they think that the property will be theirs since Atharva will not be able to bring Devika back before the prayers.

On the other hand, Atharva beats up the driver of the truck and he says that he was just given orders to drive around for the day and give the order back tomorrow not knowing there was Devika inside.

Imlie tells Atharva that they should bring Devika out first and they both rush to the back of the truck where they find an unconscious Devika.

Atharva cries as he continues trying to wake Devika up who slowly regains her consciousness.

Later, Atharva returns home and Rudra stops him thinking he is alone but gets happy seeing Devika coming with Imlie from behind.

Rudra hugs Devika and tells her that they will not leave the person who did this to her.

Rudra tells Imlie that he's grateful to her for saving them once again while Imlie says that Atharva's fans are the ones who should be thanked.

Imlie takes the phone from Atharva and thanks his friends on social media for helping them out.

However, Rudra looks away as Atharva's heart breaks at his reaction.

Later, the preparation for the prayer is done while Devika tells the servants that they all are saved because of Imlie.

Imlie is talking to Devika while she sees Atharva looking at her from behind the pillars and laughing in her head.

She further goes to him and asks him what he wants to tell her.

Atharva is about to thank her for finding Devika but Imlie tells him to not say that since Devika is her mother too.

Atharva further talks about Naina while she tells him that she had nothing to do with that.

Just then, Devika calls Imlie asking her whose phone is ringing so much.

Meanwhile, Keya destroys the things in her room in anger while Imlie comes there telling Keya's husband that he forgot her phone outside.

Further, she talks to them about someone calling and asking money for the thing they did at the concert.

Keya and her husband get angry while Imlie tells them that she will teach them a lesson in her style and leaves.

Afterward, Imlie is getting ready for the prayer while she cannot seem to wear the ancestral bangles onto her wrists.

Cheeni helps her by pushing them in and injuring Imlie in the process.

Further, Cheeni gets a message about Abhishek and leaves while Atharva comes to the room telling Imlie that the prayer is about to start.

Atharva helps Imlie put on necklaces and sees the injury on her hand as she reveals to him that she got scratched while putting on the ancestral bangles.

Atharva tells her that she shouldn't have worn those as she is more important and puts ointment on the wound while she admires him.

However, Imlie notices the color of the bangles changing to black and realizes that they are fake.

© Copyright tellybest.com, 2022, 2023. All Rights Reserved. Unauthorized use and/or duplication of any material from tellybest.com without written permission is strictly prohibited.
Cached Saved on: Wednesday 25th of January 2023 11:44:58 AMCached Disp on: Thursday 9th of February 2023 04:21:57 AM