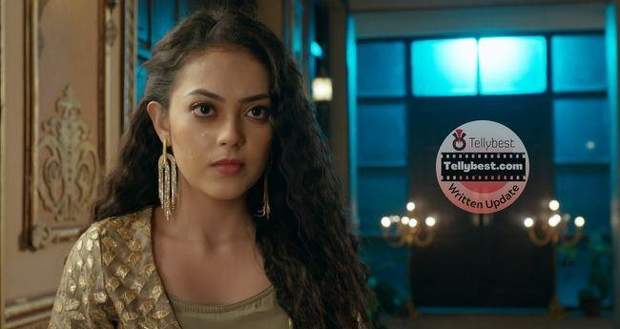 Today's Imlie 13th January 2023 episode starts with Rudra telling Atharva that he has to win Imlie's trust again as he broke it the first time.

Atharva agrees and hugs his dad out of comfort.

The next morning, Imlie is in the garden watering the plants while Atharva comes there and shows her a scorpion in the jar.

Imlie gets scared while Atharva tells her that he found it in the kitchen and captured her.

He further removes the toy scorpion from the jar and tries to scare Imlie who realizes his joke and rebukes him.

Atharva apologizes while he watches a real scorpion on Imlie's back and tries to warn her.

Imlie thinks that he is joking and starts walking away while Atharva runs to get the scorpion away from her.

However, while doing that, Atharva gets stung on the hand and starts feeling dizzy while the family rushes hearing Imlie's screams.

Imlie tries to help while Shivani keeps on trying to push her away by saying that she is the reason for anything bad happening to Atharva.

Later, Imlie ties a bandage on Atharva's hand and is about to put the paste on it but is stopped by Shivani.

Just then, Cheeni comes there with a person wearing a coat and tells the family that she overheard their conversation with the receptionist at the hospital and brought in another doctor.

However, the person reveals that he is just a lab coordinator but praises Imlie for tying the bandage around the wound.

The real doctor comes there just then and tells the family that Imlie did a good job by putting the bandage on it.

Further, Atharva is in his room resting while Imlie comes there and scolds him for getting stung.

However, Atharva tells her that he did it to show her that he wanted to be a true friend to her and she finally accepts his friendship.

Cheeni gets anxious as she is overhearing their conversation while Rudra comes there and tells her that she should return to her home and worry about Abhishek instead of Atharva.

Later, Anu and Cheeni are planning to break the relationship with Abhishek to get Atharva to get while Rupi comes there and starts doubting them for making a plan.

However, the pair lies that they were talking about outfits and jewelry.

Rupi goes to Arpita and cries to her saying that she failed to raise Cheeni properly as Cheeni is becoming eviler with Anu's company.

Back at the Rana house, Imlie accepts Atharva's friendship and jokes that she wants a video recording of him promising to not lie to her.

He agrees and she records him on his phone while giving the phone back to him.

Just then, he gets a message from Cheeni and is about to tell Imlie about it but she leaves as she gets a call from Rupy.

Rupy requests the phone number of Devika's jeweler and Imlie happily says that she'll ask Devika about it.

The next day, Imlie and Devika greet the Rana family at the jewelry shop while joking that Mr. Das will give them a discount only if Devika is there and start looking through the designs.

Meanwhile, Imlie catches up with Sundar and Arpita about her friendship with Atharva and how Sundar is having to take sleeping pills to put himself to sleep.

On the other hand, Cheeni continues to think about her conversation with the goons whom she bribed to torture Imlie at the jewelry shop without hurting her too much.

© Copyright tellybest.com, 2022, 2023. All Rights Reserved. Unauthorized use and/or duplication of any material from tellybest.com without written permission is strictly prohibited.
Cached Saved on: Wednesday 25th of January 2023 05:56:03 PMCached Disp on: Monday 6th of February 2023 04:42:21 AM