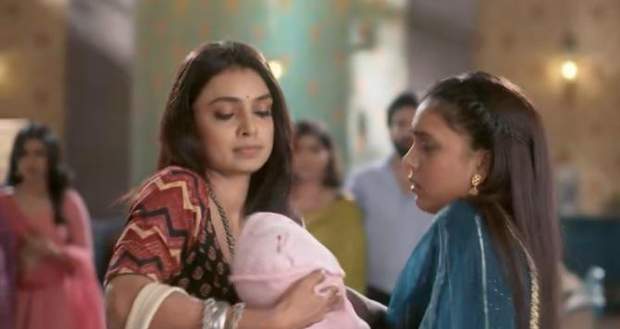 Today's Imlie 13th July 2022 episode starts with Malini throwing Imlie out of her house and Imlie falling into Aryan’s arms.

He says that she is not helpless and cannot keep falling like this because he cannot come to save her again and again.

But Imlie says that she cannot leave little Gudiya there with Malini because she hates her child.

However, Aryan says that we cannot even prove that she’s a bad mother in court.

As they’re talking, an ambulance comes outside Malini’s house and Imlie starts worrying.

While the nurse from the ambulance tells Malini that her baby will be alright, Malini screams at that man and tells him to not tell her what to do.

Imlie resolves to take care of little Gudiya and goes inside the ambulance to take the baby away while Malini is not watching.

When Malini notices that this, she is furious at Imlie, but till then Aryan and Imlie take the baby to another hospital.

They both start arguing about Malini in the hospital when the doctor says that someone needs to donate blood to the baby, so Aryan steps up.

As Aryan goes inside the donation room, some police officers arrive there to arrest Imlie for kidnapping Malini’s child.

Imlie tries to justify her actions by saying that Malini does not care about the baby, so Malini starts crying in front of the officers.

When the police insist on taking Imlie forcibly to the police station, Imlie suddenly faints and falls to the ground.

While Imlie is lying on the bed alone in the room, Malini walks in and says that Imlie can stop acting now.

They both start arguing and Malini says that no matter what Imlie does, she can’t defeat Malini.

Meanwhile, the nurse enters and tells them that little Gudiya is fine, so they both run to the donation room to see the baby.

Aryan goes to find Imlie and runs into her in the hallway, where she tells him about what happened.

Imlie and Aryan decide to collect evidence against Malini and take her down to save the baby.

Anu worries that now that Imlie knows about the truth, she might try to contact Aditya or save the child through other means but Malini still believes that Imlie can't do anything to her.

Meanwhile, Imlie gets emotional thinking about the moments she spent with little Gudiya and gets down to leave the house.

Neela taunts her and stops her from leaving but Aryan says that he’s taking her to a doctor.

After noticing a soft toy in Imlie’s bag, Neela tells Narmada that Imlie is going to meet her ex-husband’s child again.

© Copyright tellybest.com, 2022, 2023. All Rights Reserved. Unauthorized use and/or duplication of any material from tellybest.com without written permission is strictly prohibited.
Cached Saved on: Wednesday 25th of January 2023 12:59:32 PMCached Disp on: Thursday 9th of February 2023 09:08:19 AM