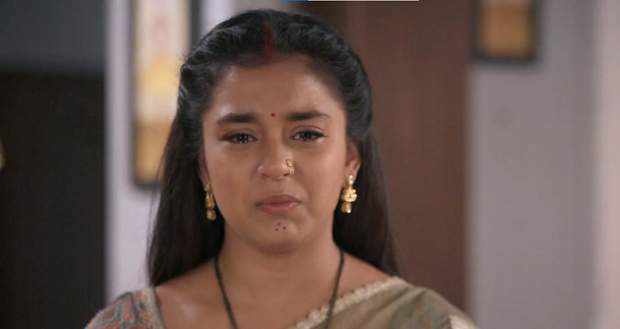 Today's Imlie 13th June 2022 episode starts with Keri (Imlie) continuing her drama and informing everyone that she's from Pagdandiya too.

The family introduces themselves when they suddenly hear Aryan's shouts.

They rush and see Aryan requesting Imlie to open the door and informing the family that she's been inside for the last hour.

Sunday notices blood trickling outside from the door while Imlie sees it and realizes that she had forgotten to put the Alta bottle in place.

Imlie manages to sneak inside her room through the window and opens the door shocking everyone.

Aryan tells her that she made everyone worried while Imlie apologizes and makes up an excuse.

Neela taunts Keri and Imlie asking if Keri can make Pasta for Gudiya to which Imlie confidently agrees.

Imlie makes up an excuse and is leaving while Aryan stops her and tries to get her to talk to him.

However, Imlie again argues with Aryan in support of Madhav and makes him leave.

Later, Keri meets Gudiya in the kitchen and wonders how to make pasta while Jyoti stands there to mock her.

Imlie manages to get the recipe from Jyoti herself and starts cooking for it mocking Jyoti.

Imlie notices Jyoti's steps on the floor and decides to check all the family member's shoes to find out who is the culprit.

In the afternoon, the family is sitting while eating pasta while Imlie sits under the table and pokes to find who's shoes match.

However, nobody's footwear matches while Jyoti comes there not wearing any footwear.

Afterward, Keri (Imlie) starts flirting with Aryan and questions him if he liked the Pasta.

Jyoti asks Keri (Imlie) for pasta while Imlie reminds her that she's having a fast today.

© Copyright tellybest.com, 2020, 2021. All Rights Reserved. Unauthorized use and/or duplication of any material from tellybest.com without written permission is strictly prohibited.
Cached Saved on: Monday 3rd of October 2022 03:04:05 AMCached Disp on: Friday 7th of October 2022 02:10:37 PM